And the pendulum swings back again

The see-sawing of the polls is causing a bit of whiplash, but we should beware not to get too caught up in how the numbers are changing from one poll to the next. The new poll by Forum Research for the Toronto Star is a good example of that, as they now show the Liberals ahead of the Progressive Conservatives.

The projection has accordingly swung violently back to a tie in the seat count and a near-tie in the vote projection. This is what happens when there are spaces of three days between individual polls being conducted: the weight of the previous poll is automatically reduced by almost three-quarters. That may sound like a lot, but this sort of weighting has proven its worth time and time again.

(As always, you can find the detailed regional breakdowns, riding projections, and tracking charts by clicking on the chart at the top of this page, or clicking here.)

The Forum poll added to the projection is, again, not without its issues. The sample is just as skewed as it was last week, with 66% of the sample 55 or older and just 6% of it 34 or younger. The appropriate proportions, if this raw sample was representative, would be closer to 36% and 26%, respectively. When Forum increases the weight of the small sample of younger voters (which gave the Liberals a wide lead over the Tories, with the NDP in a distant third), there is the potential that the errors that crept in due to the small sample size become magnified.

When I plug Forum's regional numbers into my model - which uses the exact same regional definitions as Forum - I instead get 48 seats for the Liberals, 39 for the Tories, and 20 for the New Democrats. If I was a betting man, I'd most definitely bet that mine would be closer than Forum's. Most observers of Ontario politics would do the same, I'm sure. 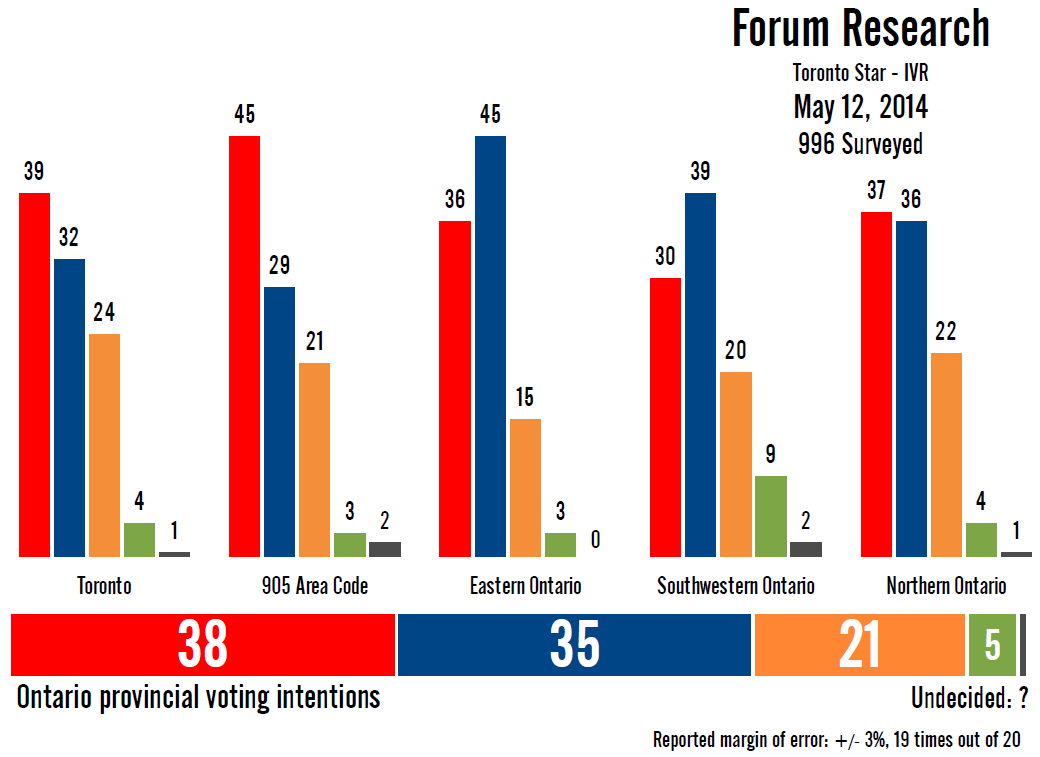 But let's look at the poll itself. Forum was last in the field on May 2-3. Since then, the Liberals picked up five points to move into the lead with 38%, with the PCs dropping three points to 35%. The NDP and Greens each slipped one point to 21% and 5%, respectively.

The jump in support for the Liberals is outside the margin of error, which Forum chalks up largely to Tim Hudak's promise to cut 100,000 jobs in the public service. Their poll reported that just 26% of respondents thought that was a good idea.

The Liberals have picked up support in two consecutive Forum polls now, while the New Democrats have dropped in four. That is a trend worth keeping an eye on, though it should be pointed out that Ipsos Reid, for example, has shown the exact opposite and the Innovative Research Group has shown Liberal stability over the same period.

The Tories do seem to have a turnout advantage, but perhaps not to the extent suggested by other recent polls. The PCs were ahead 47% to 34% among voters aged 65 and older, but the Liberals led among voters between the ages of 55 and 64, by a margin of 39% to 35%.

Kathleen Wynne has seen an uptick in her personal approval ratings, jumping four points to 38%. This came primarily from voters who formed an opinion of the Liberal leader, as the number of 'don't knows' fell from 15% to 12%. She was also up four points on who would make the best premier, to 32%.

Hudak's approval rating slipped to 23%, but his disapproval rating soared by eight points to 59%. This was, again, due to a drop in 'don't knows', from 23% to 17%, while 22% of respondents said Hudak would make the best premier (unchanged).

At the regional level, the Liberals seem to have made significant gains in the 905 area code and the southwestern part of the province. In the 905, the Liberals jumped nine points to 45%, followed by the Tories at 29% (down nine points) and the NDP at 21%. In southwest Ontario, the PCs still led with 39%, but the Liberals were up eight points to 30%. The NDP was in third at 20%.

The Tories led in eastern Ontario with 45%, followed by the Liberals at 36% and the NDP at 15% (down eight points).

With the polls unable to agree on the province wide tally, we really do need to focus on the trends from one poll to the next from the same pollsters. Innovative and Ipsos are, so far, showing stability in the race. Forum is recording a move to the Liberals, in the short term at the expense of the PCs but over the last few months at the expense of the NDP. We will have to see if the other firms corroborate these trends, whether or not they show the same topline numbers. At this point, though, the best we can say is that the race remains a toss-up - primarily because we just don't know any better.
Posted by Éric at 10:53:00 AM