Another day, another poll, another story line. This time it is from Forum Research and the Toronto Star. The latest numbers give the Liberals the lead, with their support steadily growing. Should we ready ourselves for another whiplash when the next poll comes out?

The Forum poll has the same sort of sampling issues I have highlighted before. The proportion of respondents 55 or older is almost twice as large as it should be, and the proportion of respondents 34 or younger is almost a quarter of what it should be, if this was a representative sample. Weighting can correct for this, but as explained before that has the potential to magnify the errors that can creep in with small sub-group sample sizes. 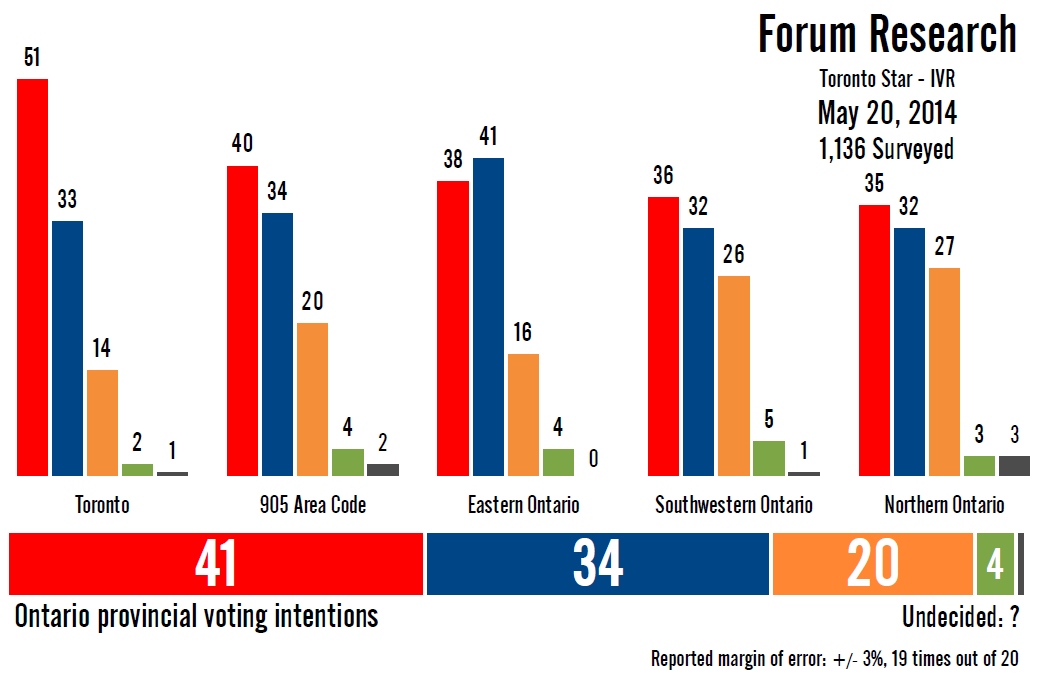 Forum was last in the field on May 12, and since then the Liberals have picked up three points to move into the lead with 41%. That is an extraordinarily high number. How high? The last poll to give the Ontario Liberals 41% dates from early October 2011 - almost three years ago.

Those three points came equally from the other three parties, with the PCs down to 34%, the NDP down to 20%, and the Greens down to 4%.

None of these shifts are outside the margin of error, but of note is that the New Democrats have now fallen in five consecutive Forum polls, while the Liberals have gained in three consecutive polls.

It will be interesting to see what other pollsters say, as it does seem that the Liberals are improving their position (either among all eligible or just likely voters) in every poll that has been out since the campaign began. Whether they really hold a lead of this magnitude, however, is another matter entirely. The normal margin of error of a random sample of this size would be around +/- 3%, roughly reducing the Liberals to as little as 38% and the PCs to as much as 37% (or, conversely, to as high as 44% and as low as 31%).

The Liberals led in every region of the province in this poll except in eastern Ontario. A Liberal lead in the 905 area code and, especially, the southwest is somewhat unusual. The only large shifts that appear statistically significant was a swing between the NDP and Liberals in Toronto: the Liberals were up 12 points to 51%, while the NDP fell 10 points to just 14%. This echoes the latest poll from EKOS, but not the one from Abacus.

In the second release from Abacus's poll this week, similar numbers were shown in terms of favourability - or at least relative numbers, since Abacus provides the option of people having a 'neutral' opinion. But 29% said they had a favourable opinion of Horwath, with 28% having a favourable opinion of Wynne and just 22% saying the same for Hudak. Negative views topped out at 42% for Hudak, against 37% for Wynne and just 21% for Horwath (she had the highest 'neutral' score).