After the back-and-forth see-sawing of the polls since the start of the provincial campaign in Ontario, it is comforting to see a poll with results that more comfortably fit into what the other pollsters have been saying. Whereas some polls see a PC lead and others see a Liberal lead, the new poll by Abacus Data for the Sun News Network splits the difference, putting the Liberals and PCs in a tie. But then the poll also agrees with what Ipsos Reid has been showing as well - that the Tories have an advantage among likely voters.

The Liberals also remain ahead in the seat count, with 44 to 41 for the PCs. But the NDP has rebounded, back to 22 seats.

While the precise seat estimate favours the Liberals, the ranges favour the Tories. They are projected to take between 38 and 54 seats, just grazing the minimum needed for a majority. The Liberals sit at between 32 and 52 seats, while the NDP is at 16 to 23 seats.

Recall that these are just the most likely outcomes. There is a 9% chance that the Liberal total will fall between the High to Maximum level (52 to 64 seats). That increases to 14% for the PCs (54 to 67 seats).

Regionally, the PC numbers have fallen back down to earth in Toronto, primarily to the benefit of the NDP. The Liberals have been steadily dropping in the 905 area code, while they have spiked in eastern Ontario. The NDP have been making gains in southwestern Ontario, and northern and central Ontario remains a three-way mess. 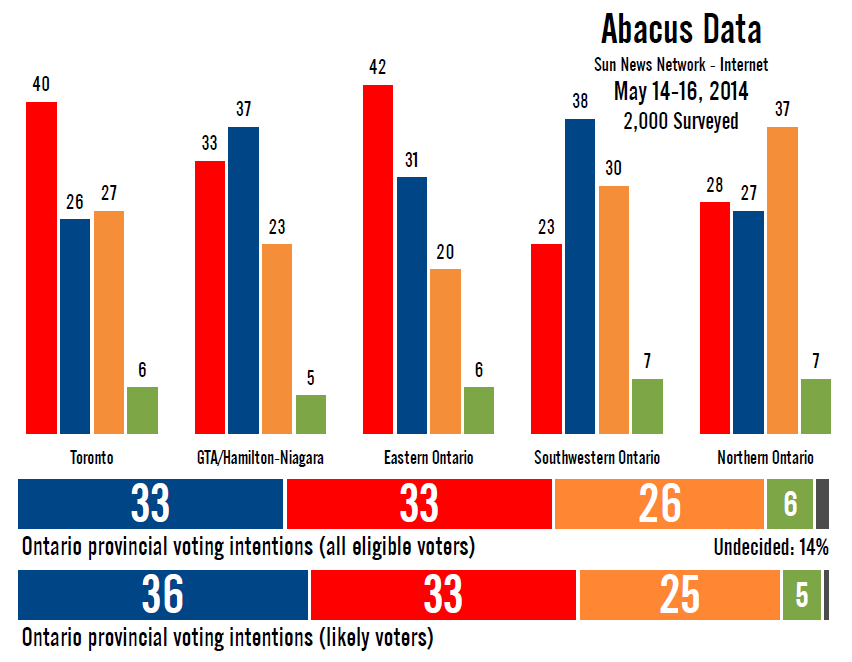 We have not heard from Abacus at the provincial level in Ontario since August 2013, so there are no trends to look at.

The PCs and Liberals were tied in the poll among all eligible voters with 33%, while the NDP trailed not too far behind at 26%. The Greens were at 6% and 2% of Ontarians said they would vote for another party. Of the total sample, 14% were undecided.

Among likely voters (determined by Abacus according to how respondents answer a half-dozen questions related to likelihood of voting and attention paid to the campaign), the PCs moved ahead with 36%, while the Liberals were unchanged at 33%. The NDP and Greens each dropped a point to 25% and 5%, respectively. Note that the projection model uses the likely voter numbers.

The Tories were in front in southwestern Ontario with 38% to 30% for the NDP and 23% for the Liberals. The PCs also edged out the Liberals in the GTA/Hamilton-Niagara region with 37% to 33%, with the NDP at 23%.

The New Democrats led in northern Ontario with 37%, well ahead of the Liberals at 28% and the PCs at 27%.

Abacus defines its regions by postal code, so M is Toronto, L is the GTA/Hamilton-Niagara region, K is the east, R is the southwest, and P is the north.

The poll had oodles of information, and I invite you to check it out. What I found most interesting is how Abacus sliced up the electorate. It found 16% of Ontarians to be 'core PCs', with 10% being 'core Liberals' and another 10% being 'core NDP'. That's the base.

Swing voters represent the rest. The largest group are Liberal-NDP swing voters, representing 21% of the electorate. This partly explains the Liberals move to the left. Another 12% are PC-NDP swing voters, while just 10% are Liberal-PC swing voters. Another 13% are complete swing voters, willing to vote for all three parties. Things are not always as simple as the left-right spectrum. This is something that Abacus will be tracking, and it will be interesting to see how these groups move over the next few weeks.
Posted by Éric at 10:02:00 AM