And the pendulum swings back again (again), with the new poll by Ipsos Reid for CTV News/CP24. The poll itself shows a few interesting trends, not all mutually supporting. The margin enjoyed by the Tories over the Liberals has expanded among eligible voters, but decreased among likely voters. The PCs have been making steady gains since November 2013, while the Liberals have also been steadily progressing among likely voters - while dropping among eligible voters. Let's try to make some sense of this.

It has been some time since the projection has put the Liberals ahead in voting intentions, and I think this is an important point to make. The polls have been in stark disagreement - this is undeniable. But even in this cloud of noise there is a faint signal. In the polls that have put the Liberals ahead, their margin was smaller than the one enjoyed by the Tories in the polls where they were ahead. Over the seven polls conducted in this campaign so far, the Liberals have averaged a 2.4-point lead in the four polls in which they have led. In the three polls in which the Tories have led, that margin has averaged 8.6 points. This means that a completely unweighted average of all the polls conducted in the campaign so far lean PC by just over two points. 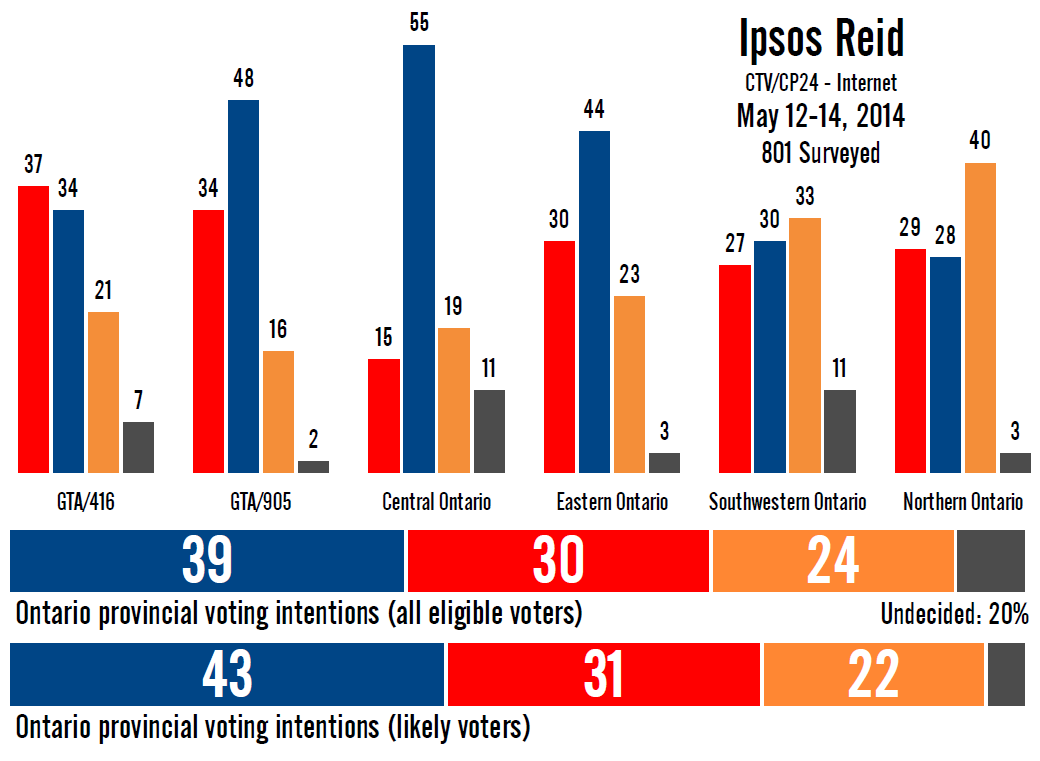 Ipsos was last in the field just a week ago, between May 6-9. Since that poll, the PCs have picked up two points to lead with 39%, while the Liberals dropped one point to 30%. The NDP was down four points to 24%, while support for other parties (including the Greens) was up three points to 7%.

The number of undecideds increased by four points to 20%.

Aside from that jump in undecideds, none of these shifts appear statistically significant. But they are part of some wider trends.

The Progressive Conservatives have been either holding or gaining support over the last four Ipsos polls, stretching to November 2013 when the party was at just 31%. That grew to 34% in February, held at 37% in April and early May, and is now at 39%. The Liberals, meanwhile, have dropped from 32% in April to 31% earlier this month and 30% this week.

However, it is a different story among likely voters (the tally used by the projection model). Here, the PCs gained one point to 43%, while the Liberals were up three points to 31% and the NDP down five points to 22%. None of these shifts were outside of the margin of error of a probabilistic sample of comparable size, but the Liberals have been making gains among likely voters: 27% in April to 28% earlier this month and 31% this week.

This could potentially be a trend that is aligning with the one recorded by Forum, which does apply a sort of turnout model to its numbers. It could be that the Liberals are falling among the total population, but among those who are actually going to vote they are improving their position.

The Liberals only led in Toronto, with 37% to 34% for the PCs and 21% for the NDP. But something unusual may be happening in this supposed Liberal fortress. Take a look at the projection tracker for the city: 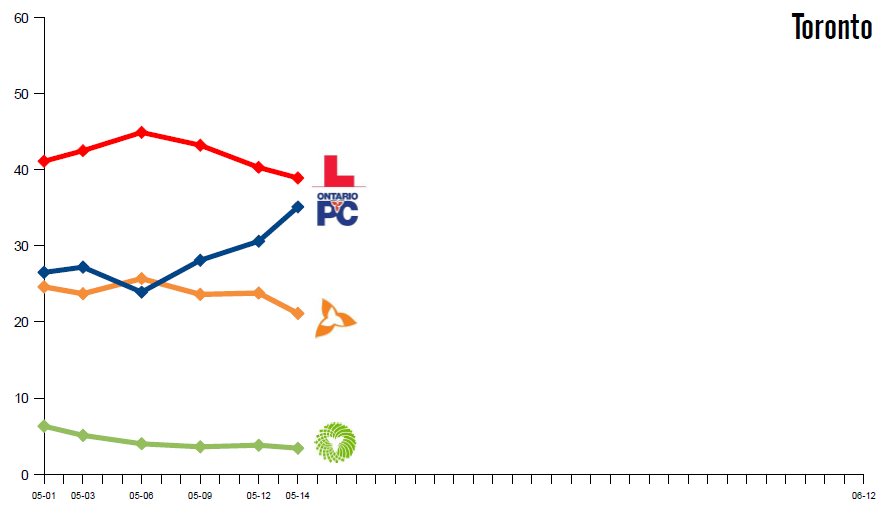 That is a rather sustained gain for the PCs at the expense of both the Liberals and the NDP. Could Tim Hudak really be making inroads in Toronto?

This is one area where the polls are in actual agreement. Unlike the other regions of the province, Toronto is defined in the same way by both Forum and Ipsos. So we can compare the trends they are recording.

It could be a fluke, but it is odd that both firms are recording similar gains for the PCs in Toronto - something would normally be unexpected. This could be a developing trend to keep an eye on.

For the rest of it, we still don't have much of an idea of where things stand in Ontario. But the evidence seems to point to a PC advantage of some sort, with the Liberals possibly making gains. This is as good as it gets in terms of discerning what is going on in this campaign right now.
Posted by Éric at 9:23:00 AM