Ipsos shows PC lead, but a shrinking one

The polls have yet to really form a consensus on the Ontario provincial election campaign, but they do seem to be moving in a more comprehensible direction. The latest poll from Ipsos Reid for CTV and CP24 still gave the Progressive Conservatives the lead, but one that is decreasing from their earlier survey. It is perhaps another example of stable Liberal, but softening PC, support. Nevertheless, the Tories retain a commanding lead among those most likely to cast a ballot.

Unlike most previous projections that gave the Liberals the seat advantage at this sort of margin, the projection now considers the PCs more likely to win a plurality of seats. They are awarded 45, or between 38 and 54 (just putting a majority in reach). The Liberals sit at 41 seats, or between 32 and 50. The NDP is at 21 seats, or between 17 and 24. The party that would win the most seats is still a toss-up, but it is leaning PC again.

But why are the polls in such disagreement? This is not something that can be easily answered. On the one hand, methodology is surely a factor. The recent online polls have been better for the Tories, the IVR polls for the Liberals. On the other hand, pollsters using different methodologies came up with similar numbers in the recent Quebec election, and are in general agreement at the federal level. Different methodologies do not necessarily give different results, and an online poll done earlier in the campaign by the Innovative Research Group had good Liberal numbers, while a telephone poll had good PC numbers.

I think the reason is something more specific to this campaign, and to Ontarians in particular. Followers of this site know that the polls in Ontario have not been in agreement for many months. In the 2011 provincial campaign, the polls were also choatic (about half gave the Liberals the lead, the other half the PCs) until the last week. However, despite the smaller sample sizes, the federal polls in Ontario have been relatively consistent.

To me, this suggests that the low level of voter interest in Ontario provincial politics (recall that turnout was just 48% in 2011) is a significant factor. There is also the question of swing voters, as I explain below. Add to all of this the methodological differences and multiply it by the difficulties in building a sample in this low-response world of ours, and I think you have the ingredients for a great deal of volatility between polls. We will see if the numbers converge in the last week or two when voters start tuning in. 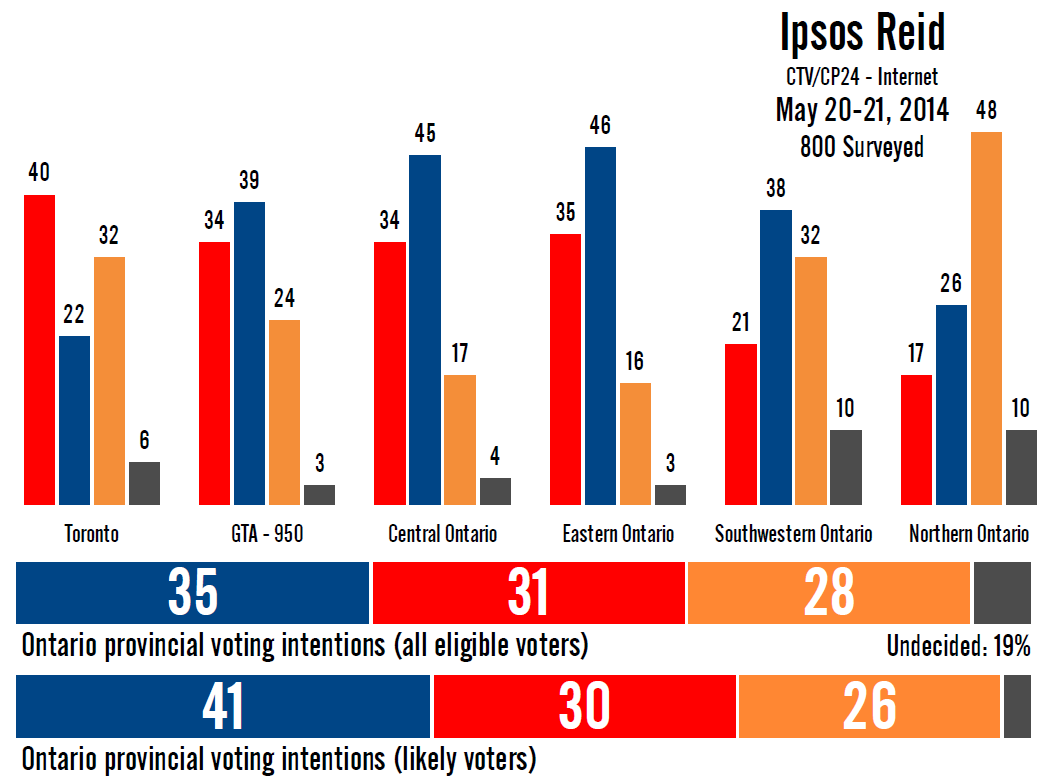 Ipsos was last in the field on May 12-14, and since then the Progressive Conservatives have dropped four points to 35%, while the Liberals have increased their support by one point to reach 31%. The NDP was up four points to 28%, while support for other parties was down one point to 6%. In all, 19% of the sample was undecided.

None of these shifts are outside the margin of error of similarly sized probabilistic samples. There is no real trend, either, as this poll is more or less a return to where the parties stood when Ipsos surveyed earlier in the campaign.

Among likely voters, the PCs dropped two points to 41%, the Liberals slipped one point to 30%, and the NDP increased by four points to 26%. Again, there is no consistent trend here, though every poll that makes the distinction shows a significant boost for the Tories among likely voters.

The PCs led in every region of the province except Toronto and the North, where the Liberals and NDP, respectively, were ahead. There is nothing in the regional numbers that stands out as unusual, but there were some big swings: the NDP picked up 11 points in Toronto, while the PCs fell by 12 points. The Liberals were up 19 points in central Ontario, and the PCs moved ahead of the NDP in the southwest.

On who would make the best premier, Andrea Horwath topped the list with 38%, followed by Kathleen Wynne at 32% and Tim Hudak at 30%. We can't compare this to the last time Ipsos asked this question at the beginning of the campaign, however, as they removed Mike Schreiner as an option (did his 9% go primarily to Horwath?).

Among likely voters, however, Hudak was first with 36%, followed by Wynne at 34% and Horwath at 30%. That is a rather significant difference.

There were also a few regional differences on this question. Despite the five-point lead for the PCs in the GTA/905 region, Wynne was well ahead with 38% to 33% for Horwath and 30% for Hudak. That is not a particularly strong sign for the PCs in a battleground region. Similarly, in southwestern Ontario Horwath was seen as the best person to be premier by 47% of respondents, compared to just 29% for Hudak. And this in the context of a six-point PC lead.

I did say that the polls are moving in a more comprehensible direction, and that may seem confusing considering the back-and-forth that we have seen since the campaign began. But look at the chart below, which plots each poll of eligible voters according to the days the poll was in the field (i.e., a poll in the field on one day gets one dot, a poll in the field over three days gets three). 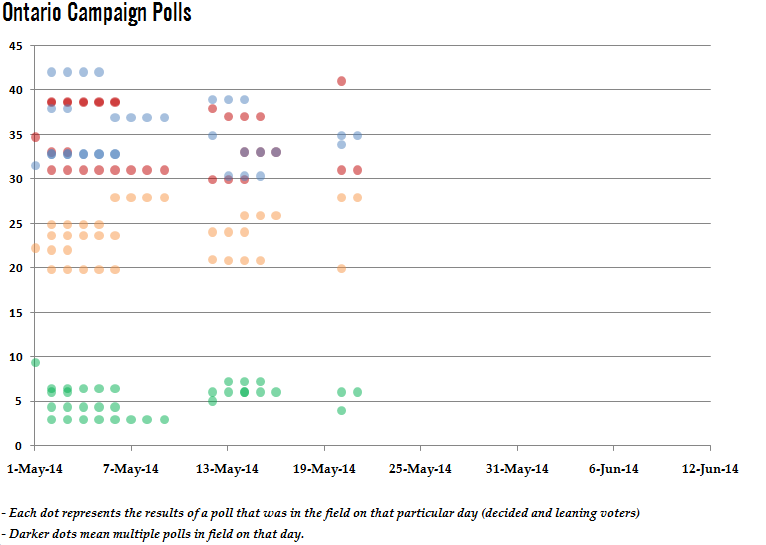 It could be that in the discrepancies there is a bit of a pattern. The PCs are moving to the mid-30s among all eligible voters, while the Liberals are still hard to pin down and stand somewhere in the 30s. The NDP is somewhere still between the high and low 20s.

The last Abacus poll suggested that there are more voters accessible to the NDP and Liberals, that they have a smaller core (10% each to 16% for the PCs) but a larger group of swing voters (46% for the NDP, 44% for the Liberals, against 35% for the PCs). This may be what we are seeing. From one poll to the next there is less variation in PC support because their support is more settled, but there are more swing voters going back and forth between the Liberals and NDP, causing their numbers to wobble back and forth more dramatically.

Something to consider as we await the next round of polls.
Posted by Éric at 9:31:00 AM