Another poll, another take on the political situation in Ontario. The latest survey from EKOS Research for iPolitics shows the Liberals ahead of the Progressive Conservatives by the healthiest margin we have seen in any poll so far in this campaign. The only leads we have seen wider than this were the ones awarded to the Tories!

The Liberals have moved ahead in the seat projection, and now lead with 49. The PCs have fallen back into second with 44, while the New Democrats have taken a deep tumble to just 14 seats. The ranges favour the Liberals, at between 39 to 57 seats against 35 to 52 for the Tories and 14 to 18 for the NDP.

Why the steep drop in the NDP projection? This can be blamed almost entirely on Toronto, as EKOS shows the party to be at a very low level of support there. The projection now gives them just 18% support in the city, and this costs them dearly in seats: they are currently projected to take only one to three in Toronto. This could be a bit of fluke in EKOS's polling, but Ipsos Reid also had the NDP relatively low in the city in their last poll. EKOS does not show the same trend as Forum and Ipsos did in terms of PC growth in Toronto, however, so it appears that the provincial capital is a battleground in flux. 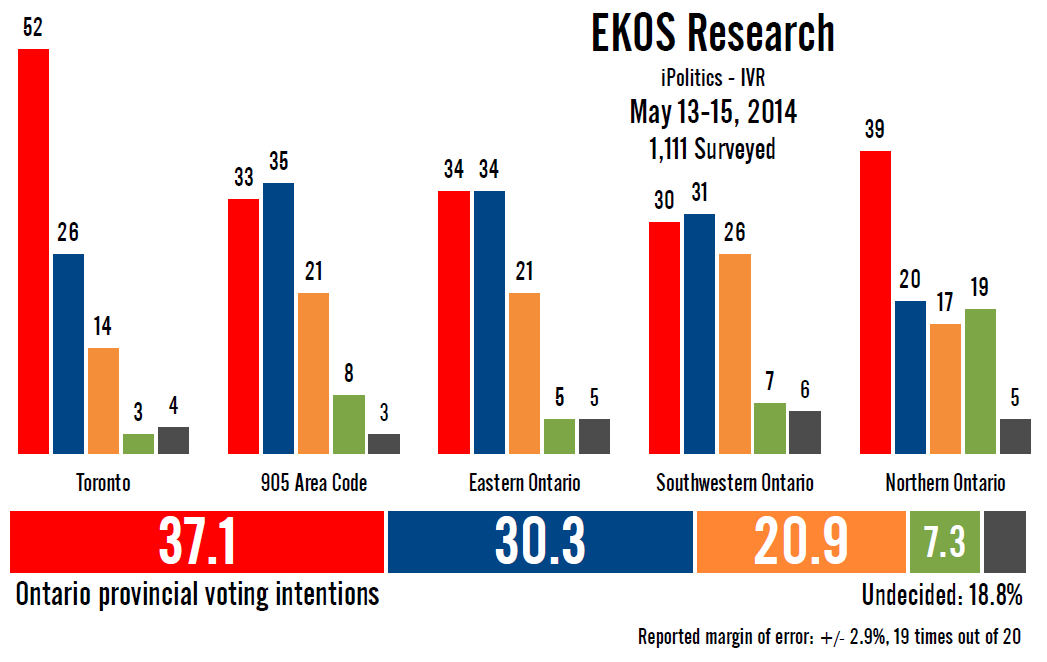 I wrote about this poll for The Huffington Post Canada, so I suggest you read that analysis instead of me repeating myself here.

All of these shifts were within the margin of error. The only regional shifts outside of the margin of error were the 13-point gain for the Liberals in Toronto, the 12-point drop for the NDP in the north, and the 10-point gain for the Greens, also in the north. That is probably an anomaly, though, which Frank Graves himself said on his Twitter feed.

Let's try and find some common threads in this poll with the other polls that have been out recently. There are a few, frayed as they are:

The Liberals have been steadily picking up support since the pre-campaign period, with EKOS showing Liberal gains in two consecutive polls. Forum also showed the same thing, while Ipsos recorded consistent gains for the Liberals among likely voters (though a drop among eligible voters). That the Liberals seem to be taking these voters primarily from the NDP also seems to be relatively consistent.

The PCs have an ingrained turnout advantage. Ipsos showed that explicitly in their 'likely voter' tally, while both Forum and EKOS have shown significant leads for the Tories among older voters, the cohort most likely to cast a ballot. In this EKOS poll, Ontarians 65 or older favoured the Tories over the Liberals by a margin of 42% to 34%.

The NDP is mostly putting up its best numbers in southwestern Ontario. EKOS had them at 26% in the region, their best result in the province. Ipsos has put them in the lead in the region, though that includes the Hamilton and the Niagara peninsula. Forum has not been as bullish in the southwest for the NDP, however. But according to Adam Radwanski of The Globe and Mail, the southwest is the cornerstone of the NDP's strategy. So far, and for the most part, that seems to be a good idea. But they are also not making inroads elsewhere, and on that the polls are unanimous.

In other news, a riding poll by Oracle in Don Valley West gave Kathleen Wynne a very comfortable lead in her own riding. The numbers were hardly different from the projection, but the poll was taken into account nevertheless. Oracle will apparently poll in all of the leaders' ridings, which seems rather fruitless since Tim Hudak and Andrea Horwath are in absolutely no danger of being defeated. Hopefully they will poll Mike Schreiner's riding of Guelph, since that is a much more interesting contest. Stay tuned.
Posted by Éric at 11:29:00 AM