Two new polls emerged in the last few days, the first from Oracle Research for Global News and the second (and third) from the Innovative Research Group, the results of which were first discussed on TVO's The Agenda. But there's a hiccup. According to these polls, the Tories are either leading by 11 points or trailing by six.

The Liberals have moved ahead in the seat count again, with 46 seats to 40 for the PCs. The ranges overlap a great deal, however, making the Liberal advantage incredibly soft. The Liberals range from between 39 to 50 seats compared to between 39 and 48 for the Tories. Despite the overall lead for the Liberals, it is still really a toss-up.

And the polls give little indication of which way we should lean. 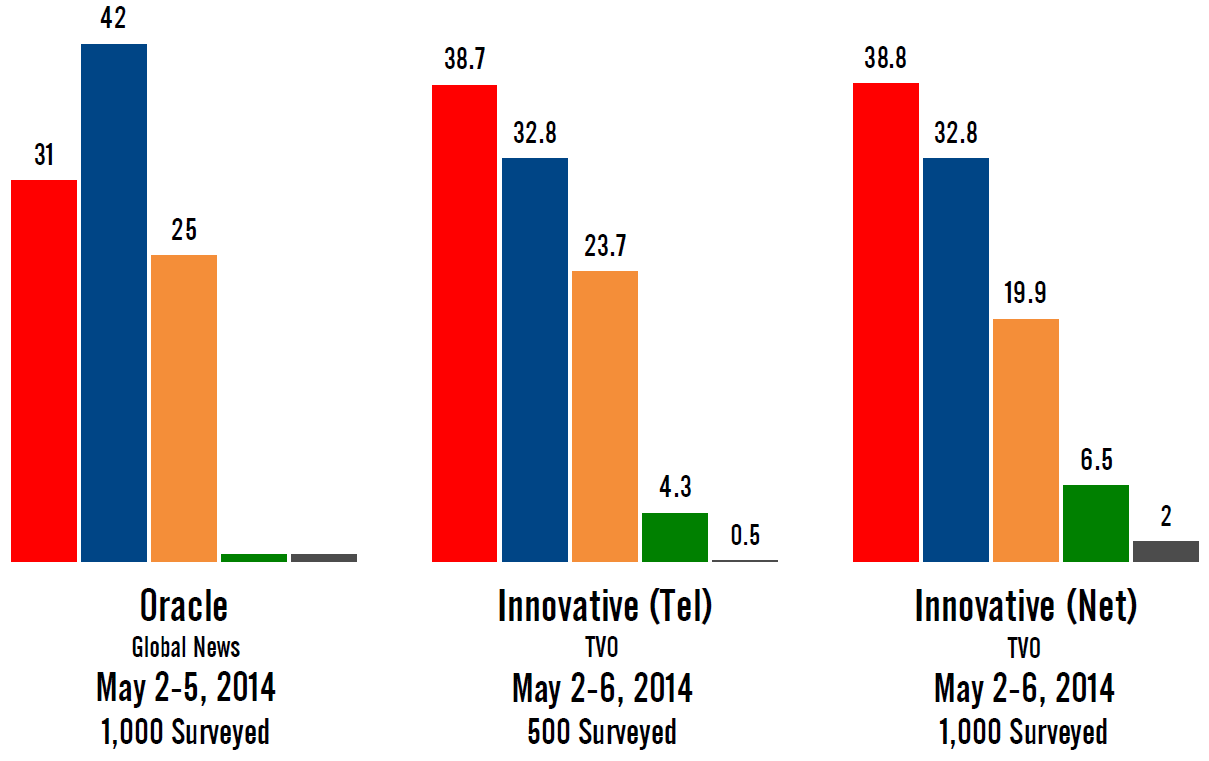 The Oracle poll pegged the Tories to have 42%, against 31% for the Liberals and 25% for the New Democrats. We haven't heard from Oracle at this level any time recently, though their website does have a poll from early April done for an energy organization. Compared to that poll, this represents an eight-point jump for the Tories and a four-point slip for the Liberals.

The two Innovative polls are interesting, in that the company released the results from both a telephone and online poll done at the exact same time. And the results were almost identical.

It is interesting that Innovative shows very little difference between methodologies, except for a higher Green number in the online poll at the expense of the NDP.

Also interesting are the other numbers released by Innovative. The company estimates that 15% of voters are "Core Liberal", with 14% being core PC supporters and 10% being core NDP supporters. That is the base (which includes undecideds), but most fascinating is Innovative's estimate of swing voters. The poll suggests that 5% are PC-NDP swing voters, 7% are Liberal-PC swing voters, while 13% are Liberal-NDP swing voters. This gives one indication of why the Liberals have lurched towards the left in their latest budget - there are more voters to pick up in that direction.

But the polls are still confused, as they have been for some time. A PC lead of the size measured by Oracle is certainly unusual, only replicated in Ipsos Reid's most recent estimate of likely voter support. The large Liberal lead is also hard to swallow, though it has been repeated in some other polls. That the race remains close among a disinterested electorate is probably the safest bet. Hopefully the polls will begin to converge as Ontarians tune in and election day approaches.
Posted by Éric at 10:02:00 AM