Will turnout give the PCs a majority?

The poll that hit the wires on Friday night was within the norm of what we have been seeing in the polls lately. Depending on the survey, either the Liberals or the Tories hold a lead with the NDP in third. With the six-point advantage awarded to the PCs by Ipsos Reid in a survey for CTV News and CP24, the poll was not unusual. But it is in Ipsos's estimate of likely voter support - the only current attempt to make such a measurement - that the PCs move ahead significantly.

As the projection model is designed to replicate the likely outcome of the election, likely voter tallies are preferred when they are available during an election campaign. Accordingly, the 14-point lead recorded by Ipsos for the Tories among likely voters has made the projection swing wildly in their favour.

The Liberals are now projected to take 28 seats, or between 21 and 42, while the NDP is at 24 seats (or between 19 and 26). In other words, if an election were held today the Tories would likely win at least a plurality, with the Liberals having the inside edge on the Official Opposition role in a tight race with the NDP.

This is a big swing in the projection. There is a cap on how much weight a single poll can carry in any projection update (66.7%), and the Ipsos poll falls short of that. But their attempt to measure how likely respondents are to turn out to the polls is absolutely vital - particularly in a polling context where no two polls seem to agree. 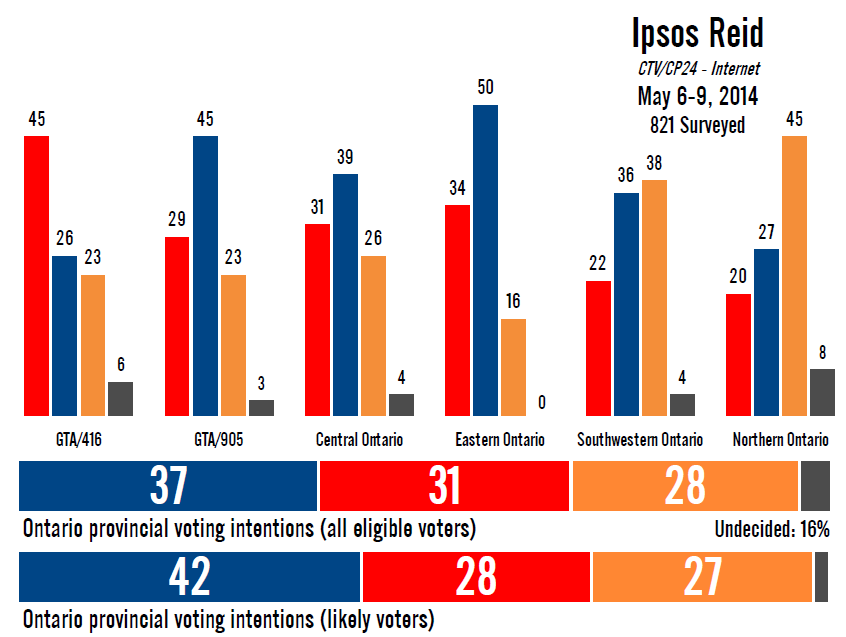 Ipsos was last in the field on April 15-17, and there has been very little change since then. The Tories were steady at 37% support among all eligible voters, with the Liberals down one point to 31% and the NDP up one point to 28%. Another 4% said they would vote for a different party (including the Greens), while 16% were undecided (a drop of four points).

Among likely voters, there was even less change. This adds some weight to Ipsos's findings, as these numbers have been consistent: 42% for the PCs, 28% for the Liberals, and 27% for the NDP.

Turnout could be an election-winning factor in the upcoming election, particularly if it is as anemic as it was in 2011. The Tories appear to have a crushing advantage in this regard. Among all Ontarians aged 55 or older (the cohort most likely to tramp out to the polls), the PC lead expanded to 51% against 24% for the Liberals and 23% for the NDP. That is enormous.

There were few major shifts at the regional level, with the Progressive Conservatives leading in eastern Ontario (50% to 34% for the OLP), the portion of the GTA in the 905 area code (45% to 29% for the OLP), and central Ontario (39% to 31% for the OLP). That area is defined by Ipsos, roughly, as the part of the province between the GTA and the north.

The Liberals led only in Toronto, with 45% to 26% for the PCs, while the NDP led in northern Ontario (45% to 27% for the PCs) and was narrowly ahead in the southwest (38% to 36% for the PCs). In Ipsos's estimation, the southwest includes the Hamilton/Niagara regions. The NDP has jumped 11 points here since mid-April.

On who would make the best premier, Tim Hudak led the way with 34%, followed by Andrea Horwath at 29% and Kathleen Wynne at 28%. The numbers were identical for Horwath and Wynne among likely voters, but increased to 38% for Hudak.

It is difficult to know what to make of all the polls that have been coming out since there has been little consensus. But let's see what other surveys show in the coming days. The trends have - so far - pointed to stability at the very least.

Two riding polls were also added to the projection. They were both conducted by Oracle Research and done for the northern ridings of Sault Ste. Marie and Sudbury. The two polls were conducted on May 1-4 via telephone, surveying 450 people in each riding. Both suggested that, since the 2011 election, the Liberals have taken a step backwards.