Consensus or not in Ontario?

On the one hand, the new poll from Ipsos Reid for CTV/CP24 has moved into the ballpark of all the other surveys we have seen over the last week. It is looking like a close race, close enough that the gap between the two parties is within the margin of error - maybe even within a rounding error. On the other hand, the new poll diverges greatly with other surveys in showing a massive, crushing lead for the Progressive Conservatives among likely voters. The pollsters may be now gauging the opinions of Ontarians correctly, but unless things converge before the end of the campaign someone will be telling the wrong story when the votes are counted.

The projection has swung wildly again with the addition of this poll. But it is less a product of the tendency of the model to lurch back and forth with every single survey (Ipsos now occupies 57% of the projection, so plenty of room for the other numbers) than it is a sign of just how different the likely voter numbers are from the rest of the field.

So is this a case of the polls disagreeing with one another again? Not exactly. The polls are now in general agreement on the state of the race, in that it is close and somewhere around 35% for the two leading parties. But the way likely voters are estimated is different from one poll to the next, a difference that perhaps has a much more significant effect on the numbers than the methodological variations between telephone and online polling.

EKOS will be coming out with likely voter numbers before the end of the campaign, so we will see what method they are employing. Forum uses a likely voter model, but it is a 'secret sauce' and we know nothing about it. Abacus asks respondents a half-dozen questions relating to commitment and interest in the election, and bases their estimate on how likely a respondent is to vote on that. Ipsos asks survey takers how likely they are to vote, only counting those who say that 'nothing short of an emergency' would prevent them from voting to come to their likely voter tally. That number is tracking with turnout from 2011, so on the face of it could be an effective model.

This makes it not entirely about disagreement among polls but rather the models used for estimating turnout. The two are very different. We can only wait until June 12 to see which model was the best. 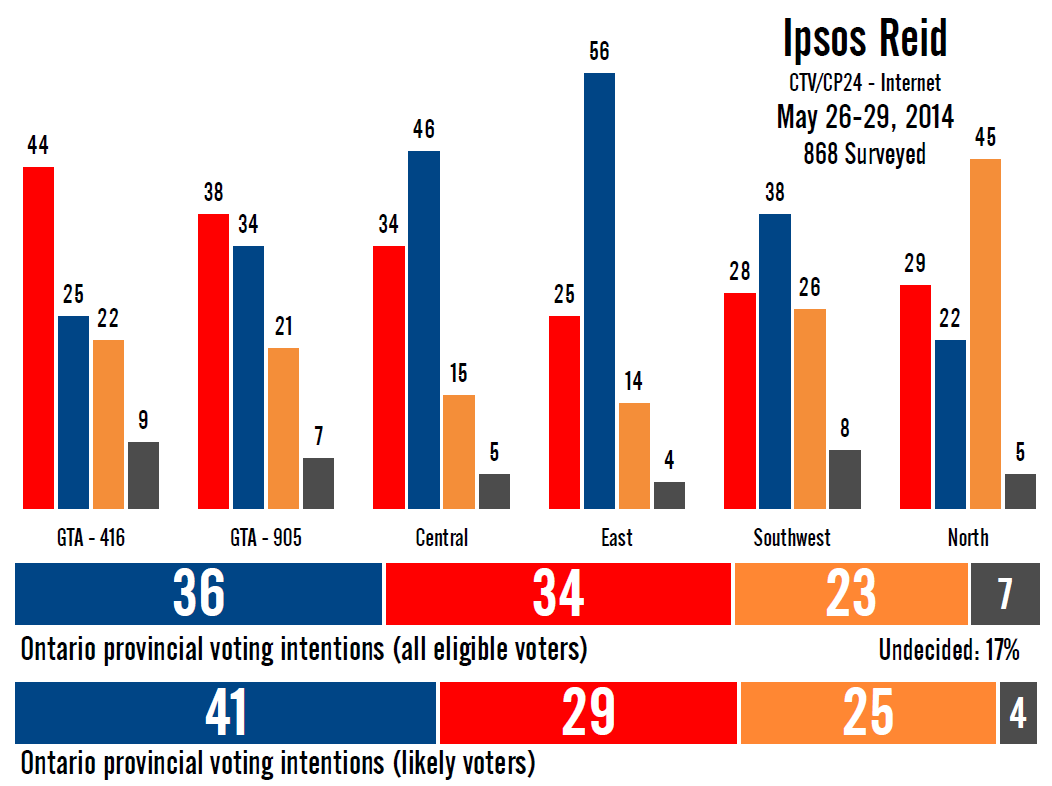 Ipsos was last in the field on May 20-21, and since then recorded a one-point gain for the PCs, who led with 36%. The Liberals were up three points to 34%, followed by the NDP at 23%, down five points. Support for other parties was up one point to 7%, and 17% of the entire sample was undecided.

Only the drop in support for the NDP would be outside the margin of error of a probabilistic sample of this size.

Among likely voters, the Tories were steady at 41%, with the Liberals and NDP each down one point to 29% and 25%, respectively. Stability here, then, which would suggest that while unlikely voters may be moving towards the Liberals (the party has gained in two consecutive Ipsos polls), those who are most likely to cast a ballot are sticking with their preferred choice.

Regionally, the PCs were in front in central, eastern, and southwestern Ontario, while the Liberals led in the GTA and the NDP in the north. The Liberal lead in the 905 region of the GTA is the first that Ipsos has recorded since the beginning of the campaign.

The disparity between the results among eligible and likely voters makes this poll a difficult one to put into context. It is certainly a relief to see the eligible numbers squaring with those from other surveys, as it means we now have a better understanding of what is going on. But the likely voter numbers are still extraordinary for the PCs, and like nothing other polls are showing (even those that explicitly or implicitly account for turnout). For now, we can simply say that turnout will be key, both in terms of pollster accuracy and the election outcome.
Posted by Éric at 10:05:00 AM