The year is coming to a close, and as I don't think I will be making another projection in 2009, I thought I'd take a look back at the projections I've made throughout 2009.

This is my first full year of making projections, and it is interesting how things progressed over the year. I'm looking forward to another year of projections in 2010, which will hopefully include some provincial projections (and elections). From what Michael Ignatieff has been saying in the press lately, it looks like we will not have an election in the coming year. But then again, we were absolutely certain to have one in 2009. So who knows anymore! 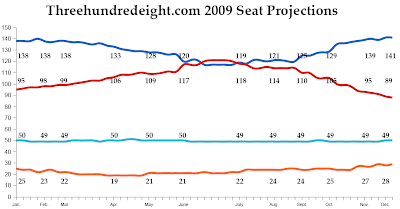 If you take a quick glance at the opinion polling trends graph to your right, you'll see the projections more or less follow the same trends.

Let's start with the NDP. They've shown decline and growth, dropping as low as 19 around April. Things started to get better at the end of the summer and into the fall, and today the party is up to a projected 29 seats. So, we've seen a variation of 10 over the year.

The Bloc has been, as usual, rock steady. They've straddled the 50-seat mark, rising to 51 and dropping to 49, and back. That is what happens when they've managed to keep completely steady in the province.

The Liberals and the Conservatives more or less traded seats throughout the year. There was a period from the end of May to the middle of August where the two parties were neck-and-neck, and in the month of June the Liberals even had a small lead in seats. But the parties have not moved an inch, relatively speaking, since January 2008. The Conservatives are back to 140, plus or minus a handful of seats, while the Liberals are back to around 90, plus or minus a handful of seats.

Politically speaking, 2009 changed nothing when it comes to voting intentions. And I don't think the year has changed perceptions of the various parties either. Ignatieff is still considered an unknown because of the lack of policies the Liberals unfolded during the year, Harper is still seen the same way (not disliked, not liked), while the Bloc is still the choice of 2/5ths of Quebecers and has a stranglehold on the francophone vote. The NDP hasn't moved much either, but to their credit has managed to maintain most of the support that has pushed them to all-time highs since 2006.

What will 2010 bring? It sounds like it is going to be a boring year, politics-wise. It is possible parliament won't even sit until after the Olympics, and it is unlikely the Liberals will threaten to bring down the government after the thumping they received in the polls in September and October. That will leave the Jack Layton and Gilles Duceppe to do what they did to Stephane Dion. What's old is new again.