Completing their rounds of the Atlantic Provinces, Corporate Research Associates has released a new poll of the smallest province in the country. 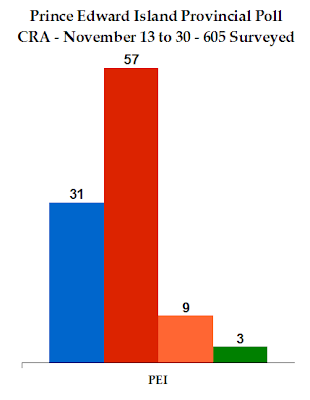 The Liberals under Premier Robert Ghiz have a very comfortable lead, but are actually down five points from where they were in an August poll. They've lost that ground to the Progressive Conservatives, up four points, and currently with an interim leader.

The Island New Democrats are up three points, and the Greens are down two.

Now, PEI is not given a lot of media coverage in the rest of the country. So I don't know much about it. I know I have some PEI readers, though, so if you want to chime in with your views on politics on the Island, please do!
Posted by Éric at 8:33:00 AM