The National Post is reporting a new Angus-Reid poll of Alberta politics. 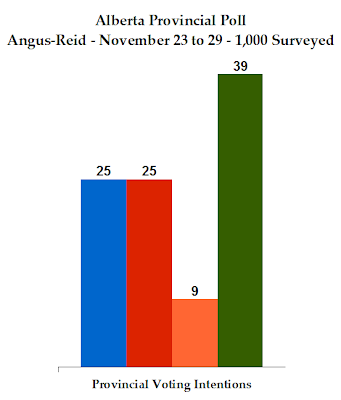 So, that's a big honking lead for the Wildrose Alliance. They've managed to push the Progressive Conservatives down to the level of the Liberals at 25%. The NDP is well out of it.

At these levels, the WA is on the bubble for a majority government, while the Progressive Conservatives would be fighting the Liberals for the role of Official Opposition! As The National Post states, the PCs have led the province since 1971, so the significance of these numbers is clear.
Posted by Éric at 8:43:00 AM