A very observant blog reader pointed out this poll by Innovative Research of the federal voting intentions in BC. It was found in a poll about the dining habits of British Columbians. 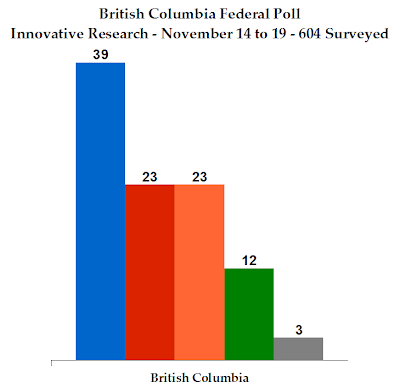 I had to adjust for the undecideds and refusals, but we get a strong Conservative lead. Nevertheless, the Tories still aren't doing as well as they need to.

This poll would give the Tories 22 seats, the Liberals would take nine, and the NDP would take five.

As the poll was taken in mid-November, it is a little dated. However, it is a demonstration why I shouldn't jump the gun with my monthly summaries!
Posted by Éric at 2:24:00 PM