Time to look at November's polling. Six national polls were taken during this month (half as many as last month), totalling about 15,600 interviews. Here are the results we get at the national level, with the difference from last month's average in brackets.

The Conservatives actually post a relatively large loss, while the Liberals have slowed the bleeding. They had lost more than three points in October, but have managed to shave those losses down to less than one point. In other words, you know you're in trouble when goods news is that you didn't fall on your face too hard. The NDP makes a big jump of two points, while the Bloc is up a little and the Greens are up a lot. 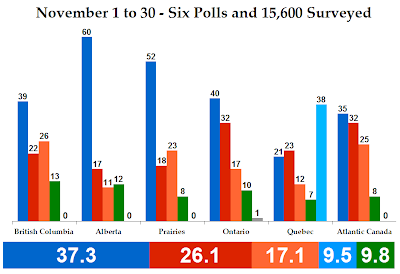 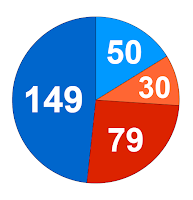 So, not much movement actually. The Conservatives drop two seats and the Liberals drop one, with all three going to the NDP. We're looking at a situation almost mirroring the current one, with the Conservatives having a few more seats coming from the NDP.

The Conservatives have slipped here, more or less erasing the gains they had made in October. The Liberals post another loss, but the NDP is up again. That marks gains of almost 2.5-points over the last two months, and they've opened up a nice lead over the Liberals for second. Could this be the HST issue? The Greens put up the biggest gain in the province, but are still far away from electing Elizabeth May.

The Conservatives make a gain of a point, which is insignificant when they have this kind of lead. The Liberals have only lost 0.1 points, indicating that their decent polling numbers in Alberta might be for real. The NDP is down quite a bit, enough to allow the Greens to move into third place. They're actually up five points over the last two months.

A big drop for the Conservatives, but this is probably due to the unlikely 73% result they posted in an October poll. The Liberals are down half-a-point, but the NDP is up six points, erasing their losses from October. The Greens are also up about two points.

The Conservatives have lost the gains they made in October, but still stand at the 40% mark which represents an improvement on their 2008 electoral result. The Liberals are up (yes, up) by 0.3 points. Nothing spectacular, but it could be a sign that Michael Ignatieff has turned the corner. The NDP can also look at the situation in Ontario with a smile, as they are up almost two points, in a province they desperately need to get back to the 18% level they posted in the 2008 election. The Greens have managed to maintain their support over the last month.

The Bloc is down by 0.3 points, reseting their 0.4 gain from October. In other words, they are stable. The Liberals are down, but seem to be approaching their floor as their decline has slowed. On the other hand, the Conservatives have halted their march upwards in the province, and have actually posted a small loss. The NDP put up a nice gain, and are above their 2008 election level. The Greens are up a little bit.

The Tories are down a little bit, but are still at a very good level for them. The Liberals are down a big four points, representing a loss of more than seven points in two months. They're now in second place in what had remained their only stronghold. The NDP are the big winners in the region with a gain of three points, while the Greens are up two points. However, that gain is due to an unlikely 21% in one poll. 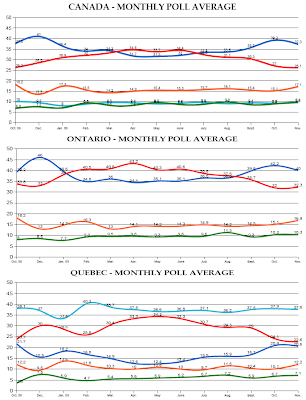 Overall, it was actually a mixed month for the Conservatives. Of course, they are still well ahead and so from that point of view it was another good month. But relatively speaking, their strength is starting to fade. They are down in five of the six regions, and their only gain comes in Alberta where they have a lock on virtually every single seat anyway. The losses in Atlantic Canada and Quebec were small but the losses in Ontario, the Prairies, and British Columbia were not. That they are dropping in Ontario and BC - their two battlegrounds - is worrisome.

The Liberals, for once, didn't have a completely disastrous month. However, they still saw losses in five of six regions. Their small gain in Ontario is important because the province has traditionally been their bread and butter, and the losses out West were relatively small. The drops in Atlantic Canada and Quebec mean trouble, particularly in Atlantic Canada.

The NDP had a very good month, gaining in five of six regions. The gains in the Prairies, Ontario, Quebec, and Atlantic Canada were all significant, while any gain in British Columbia is a plus and Alberta is probably a write-off anyway.

The Bloc was stable, which is good as they have a strong lead. The Greens had a good month as well, gaining in five regions and remaining stable in one. But they are still far from electing anyone to Parliament.

This actually makes sense, if the narrative we're following is a return to status quo, circa Fall 2008. The Conservatives need to come down a bit to get back to that level, as do the Liberals. The NDP needs to inch back upwards, and the Bloc needs to stay where they are. If this narrative is the reality, everything is lining up as it should.
Posted by Éric at 9:12:00 AM