A new poll by the Corporate Research Associates has been released. 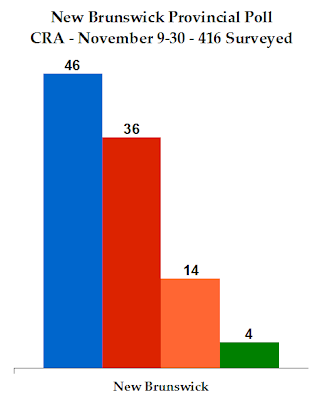 This aligns very closely with the recent Léger Marketing poll, though this one gives the NB Liberals a little more support at the expense of the NB NDP.

This is the highest the Progressive Conservatives have been in CRA polling in the last year. It is also the lowest result the Liberals have put up. The NDP result is actually on the lower side.

Shawn Graham and David Alward are now tied for best Premier at 29%, followed by Roger Duguay of the NDP at 8%.

Graham has about a year to turn the ship around, or the Progressive Conservatives will be back in government in New Brunswick.
Posted by Éric at 1:57:00 PM