The Chronicle-Herald is reporting on a new Corporate Research Associates poll. 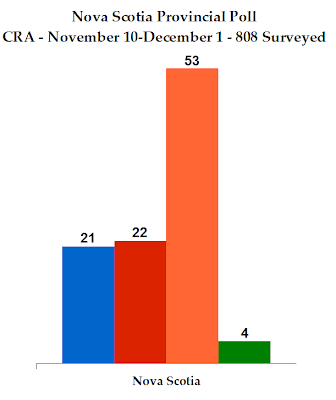 So the Nova Scotia New Democrats still have a mighty lead over their opponents, though this does mark a drop of seven points since the last CRA poll in August.

The Liberals are up three points while the Progressive Conservatives are up five. The Greens are down two.

Darrell Dexter is still the top choice for Premier at 44%, interestingly well below his party's support level. This is not the case for Liberal leader Stephen McNeil, with 21% support, but is with the Progressive Conservative leader (yet to be chosen) who is at 12%.

The NDP is still well above the 45% they earned in the June election, while the Liberals (27%) and Progressive Conservatives (25%) are still punching below their weight.