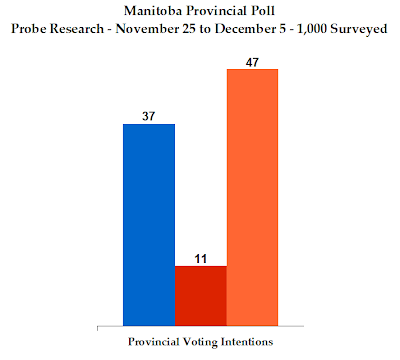 The New Democrats, and their new premier, have a good ten point lead over the Progressive Conservatives. But things are pretty static in the province. Probe's last poll, in September, was not much different. These numbers represent a two-point gain for the NDP and a loss of one point each for the Progressive Conservatives and the Liberals - all well within the margin of error.

NDP support is strongest in Winnipeg, where the party leads with 52% to the PC's 30%. The Liberals trail with 13%.

It would seem that Manitobans are just fine with their new Premier, and that they haven't changed their opinions since the 2007 election. At that time, the NDP took 48% of the vote, the Progressive Conservatives took 38%, and the Liberals took 13%. In Winnipeg, the breakdown was 53%, 29%, and 15%. So virtually no change at all!

At the federal level, the results are very different, demonstrating that in Manitoba provincial and federal fortunes don't coincide:

Compared to their last poll in September, this is a two point gain for the Tories and a one point gain for the NDP and Greens. The Liberals are the big losers, dropping four points. That result, at least, is outside of the margin of error.

This isn't much different from 2008's election, however. The Conservatives had 49% of the vote, the NDP had 24%, the Liberals had 19%, and the Greens had 7%. So, all within the margin of error. Perhaps, if an election took place today, there would be no changes in Manitoba.

This is confirmed by the Winnipeg results. The Conservatives lead with 43% (up four points), while the NDP is at 26% (up five points) and the Liberals are at 24% (down six). The Greens are at 7%, down one.

In other words, things haven't changed at all!

As I track "the Prairies" together, I can't use this poll in my projection. But the lack of change, both at the provincial and federal levels, is remarkable.
Posted by Éric at 10:38:00 AM