Back in July, I did a proportion representation exercise where I portioned out seats according to the 2008 election results and the current make-up of parliament. In other words, that PR exercise assumed 308 seats with the same provincial representations as they currently have in parliament.

In this exercise, I took it a step further. I divvied up the House of Commons into 332 seats, or one seat for every 100,000 Canadians. I then divided up the provinces according to that principle.

Using these figures, and portioning out seats according to the 2008 electoral results (always rounding as necessary, and giving the higher ranked parties priority) we get the following result: 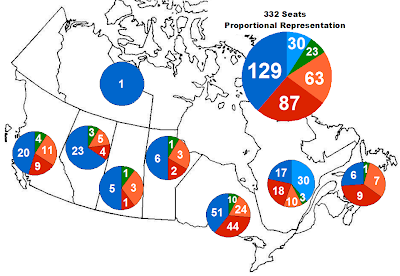 Obviously, still a Conservative minority. But rather than 46.4% of the House of Commons being occupied by the Conservatives, only 38.9% of it is.

In this scenario, the Liberals and New Democrats, with 150 seats combined, could out-vote the Tories. But they would still be short of a majority, and would require the support of the Greens or the Bloc Quebecois (significantly reduced, as you can see) to pass legislation.

Conservative support is mostly divided between the West (55 seats) and Ontario (51). They also have a good-size caucus from Quebec (17) and a few Atlantic Canadian MPs (6).

The Liberals have their power-base in Ontario, with more than half of their MPs from that province. Quebec and the West each have almost equal representation, while the Liberals would have the most Atlantic Canadian MPs.

The NDP would be, like the Conservatives, evenly divided between the West and Ontario (22 and 24 MPs, respectively). They'd also have 10 Quebec MPs and 7 in Atlantic Canada.

The Bloc is the big loser in this new configuration, as they would be reduced to only 30 seats.

The Greens are the big beneficiaries here, going from 0 seats to 23. They are also evenly divided between the West (9) and Ontario (10), but have three Quebec MPs and one from Nova Scotia.

Anyway, I find these alternate scenarios fascinating. What a difference it would make in Canadian politics!
Posted by Éric at 12:20:00 PM