EKOS has a new poll out, and it actually has some interesting results. The first of which is a nine-point lead by the Conservatives. No more double digits! 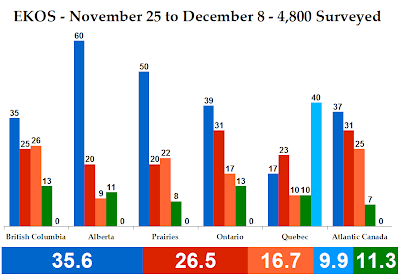 The Conservatives are starting to show some weakness, as they move down below their 2008 election result. They are now at 35.6%, which puts them far away from a majority. They've actually lost 1.9 points since the last EKOS poll.

The Liberals also post a loss of 0.6 points, indicating that they aren't benefiting from the Tories' slip.

The beneficiary seems to be the NDP, who is up 1.4 points.

The Conservatives are relatively stable in British Columbia and Ontario, but drop four points in the Prairies and five points in Quebec. They seem to have lost some significant ground there. They are up four points in Alberta and two in Atlantic Canada.

The Liberals had mixed results, gaining two points in British Columbia and the Prairies but losing two in Ontario and Atlantic Canada. They're stable in Quebec, which they absolutely need to be. They were on a terrifying downward trend.

The NDP's gains came primarily in British Columbia and Ontario, where they are up two points each. These are good results for them.

The Bloc is up three points in Quebec and is back up to the 40% level. With the Liberals in second at 23%, that is a big lead for them.

The Greens are down four points in British Columbia. 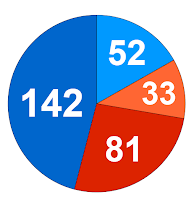 So, the Tories are backing away from a majority. They take 68 seats in the West and North, 56 in Ontario, 7 in Quebec, and 11 in Atlantic Canada.

The Liberals are at about where they were a year ago. They take 15 seats in the West and North, 35 in Ontario, 15 in Quebec, and 16 in Atlantic Canada.

There was also an Afghan detainee/torture poll, the results of which can easily be summed up. Canadians overwhelming believe that Afghan detainees handed over by Canadian Forces were tortured, and that Colvin's testimony is reliable. Canadians also oppose, with a majority, an extension of the mission in that country.

Can a link between the Conservative slip and the Afghan detainee issue be drawn? I'd say that it is definitely a factor. However, that the NDP is benefiting from the Tory woes rather than the Liberals points towards the HST issue, which is being fiercely opposed by the NDP. Just yesterday, I watched the NDP use obstructionist tactics in the House of Commons to delay a vote on it. It didn't work, but it was funny to see the NDP MPs veeeerrrryyy ssslllooowwllly stand up and sit down to record their vote. And then Thomas Mulcair spoke for about 30 minutes.

Anyway, perhaps the Christmas season will have more surprises than we think. Are we going to see the Tories in the low-30s, the Liberals stagnant, and the NDP approaching 20%?
Posted by Éric at 9:04:00 AM