So, Angus-Reid has a new poll out and it actually shows a significant change. (gasp) 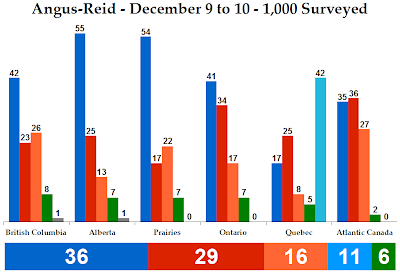 The Conservatives are down below their 2008 electoral result, but more importantly, the Liberals are up to 29% - one of their best polls in a long time. This represents a big six-point jump from Angus-Reid's last poll, taken between November 14-16. That is bigger than the margin of error. The Tories are down two points and the NDP is down one. The Greens are also down four points.

Out West, there isn't much that is surprising. Except in Alberta, where the Liberals have jumped ten points (the Conservatives are down six). The Liberals also saw gains in British Columbia (4 points) and the NDP had a big drop of five points in the Prairies.

In Ontario, the Conservatives are still quiet comfortable at 41% but are down three points. The Liberals are up five points and the NDP is up two.

In Quebec, the Bloc is stable and with a comfortable lead. The Liberals, however, are showing life with a gain of six points. The NDP seems to have been the victim of this gain, dropping six points. The Tories are down two.

In Atlantic Canada, there isn't much change. The Conservatives are up two points and the Liberals are up three, giving them a narrow lead. The NDP is down two. 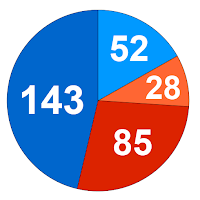 Despite the better numbers, the Liberals are still taking in a small number of seats. The Conservatives manage to repeat 2008's exploit, while the NDP is down and the Bloc is up.

This is an important poll going into the holiday season. Angus-Reid has been reliable in the past and is my highest rated pollster. This poll shows that the Conservatives are no longer in majority territory while the Liberals are showing signs of life. It will be interesting to see how things progress between now and the return of Parliament in January.
Posted by Éric at 2:32:00 PM