EKOS has their last poll of the year out. They'll be back in early January. It will be fun to see how, or if, things have changed over the Christmas break. 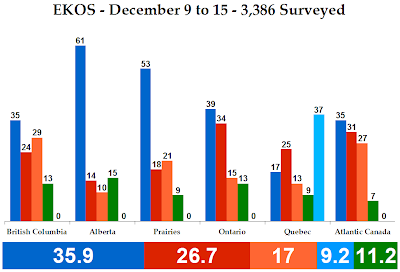 Obviously, they haven't changed much prior to the break. There is virtually no change in the national numbers from the December 8 poll. The Conservatives are up 0.3 points to 35.9%, as are the NDP (now at 17%), while the Liberals are up 0.2 points to 26.7%. All well-within the margin of error.

The best regional result for the Tories comes in the Prairies, where they are up about three points and stand at 53.1%. They are down two points in Atlantic Canada, however. They are stable in Ontario at 39%, which is good considering where they are, but also in British Columbia and Quebec. That is not good, as the Tories are under-performing in those two provinces.

The Liberals gained three points in Ontario to reach 33.5% - very important - as well as two in Quebec, where they are at 24.6%. They are down six in Alberta, however, indicating that their high result last week could have been a statistical fluke.

The NDP makes its biggest gain in British Columbia, about three points to reach 28.8%, but they are down two in Ontario and stand at 14.8%. They are up three in Quebec and two in Atlantic Canada, good results for them.

The Bloc is down three points in Quebec, but maintain a significant lead at 36.8%. 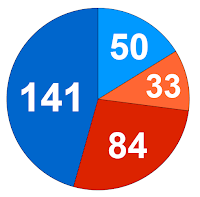 It wouldn't surprise me if this is the last poll of the year. Angus-Reid, the only other frequently active pollster of the last two months, has already released a poll this month.

Things have really come back full circle. It is as if the last year had no effect on the voting intentions of Canadians. We saw both the Conservatives and the Liberals take the lead during this year, but it seems that voters are reverting to last year's voting behaviour. It will be interesting to see how things will change with the Olympics and the international summits in Canada early next year. But also the Afghan detainee issue, which won't go away. Colvin's response yesterday was absolutely devastating, and if politicians step out of the limelight for the next few weeks but the story of the torture doesn't go away, that could be very damaging to the Conservatives.

On a personal note, I find the arguments around the torture issue disturbing. Canada doesn't torture, and Canada's official position is that torture is horrible, that it is a crime. Torture is wrong, no matter who does it and who is being tortured. Even if Canada handed Osama bin Laden over to the Afghans and they tortured him, it would be wrong. We don't have to sink to the level of our enemies. And to be complicit in torture puts our men and women in Afghanistan in danger, as it encourages our enemies to torture our soldiers if they become captured. To paint the opposition as the "defense attorneys of the Taliban", as I heard Kory Teneycke say last night, or to be criticising our armed forces, is really disappointing.

No matter what our political views, this type of discourse needs to be spoken out against. Politicians on both sides of the aisle need to be more responsible in what they say. Perhaps it is a naive hope, but I want to live in a country with intelligent, respectful political debate.
Posted by Éric at 9:36:00 AM