Angus-Reid has a new Ontario provincial poll out. 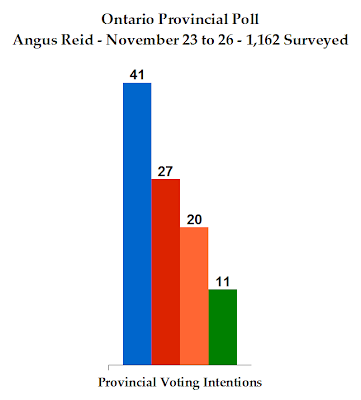 So, a huge result for the Progressive Conservatives, with strong numbers everywhere. The Liberals are down very low, while the NDP is at 20%.

The Tory strength is distributed across the province, but is especially high in the Hamilton-Niagara area (51%) and in the North and East (47% each). In the GTA, the party is still at 38% and is even at 33% in the 416 area code.

The big problem for the Liberals is that Ontarians' opinion of Dalton McGuinty has worsened. This is the case for a whopping 54% of the province, while the same can be said for only 16% of Ontarians when it comes to the Progressive Conservative leader, Tim Hudak. He benefits from having the best "improvement" score with 15%, which is still relatively low.

Certainly bad news for the provincial Liberals, and good news for the Progressive Conservatives. Of course, an election is a few years away so there is plenty of time for Ontarians to forget about the HST issue.
Posted by Éric at 10:34:00 AM