The latest poll from Angus-Reid, released yesterday, shows the Liberals and New Democrats down, with gains going to the Conservatives and Greens. 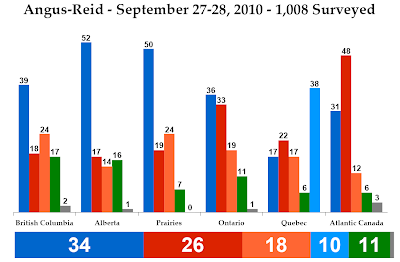 Compared to Angus-Reid's last poll taken on August 10 and 11, the Conservatives have gained one point and stand at 34%. The Liberals are down three to 26%, while the NDP is down one to 18%.

The Greens have gained two points and stand at 11%, with the Bloc Québécois at 10%.

In Ontario, the race is still close with both the Conservatives and Liberals dropping one point to 36% and 33%, respectively. The NDP, contrary to some other polls, is at 19% here (up one). The Greens are unchanged at 11%.

In British Columbia, the Conservatives are steady at 39%, with the NDP falling three points to 24%. The Liberals are down seven to 18%, while the Greens are up nine to 17%. These are the types of changes chalked up to low sample size.

The Liberals lead in Atlantic Canada with 48%, down 17 points from August's ridiculous 65%. The Conservatives follow with 31%, up 13.

The Conservatives are down nine points to 52% in Alberta, followed by the Liberals at 17%. 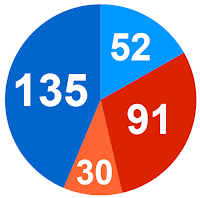 With this poll, the Conservatives would win 73 seats in the West and North, 48 in Ontario, seven in Quebec, and seven in Atlantic Canada for a total of 135.

This poll looked at a few other subjects, including the approval and disapproval ratings of the three main party leaders. Stephen Harper's approval/disapproval rating was 25/49, a gap that has negatively grown by three points.

Jack Layton's split is 27% to 37%, a gap that has negatively grown by five points. That is no small amount, and perhaps an indication of how the long-gun registry has hurt him.

Michael Igantieff's split is 15% to 47% - very bad numbers, but the gap has actually grown in a positive way for the Liberal leader. It's only one point, but good news on this front is hard to come by for Ignatieff.

All in all, this is a good poll for the Conservatives. An eight-point gap is much wider than what we've seen in other polls. But they didn't get any stellar regional results - they could be doing better everywhere.

Relatively speaking, this is a good poll for the NDP. But with most other polls showing their support shrinking, this could be just an outlier.
Posted by Éric at 1:40:00 PM