Bloc leads in Quebec City, all Conservative seats at risk in Segma poll

A new poll by Segma Recherche for Le Soleil shows that the Bloc Québécois is ahead in the Quebec City region. And thanks to some riding polls, we can say that anywhere from two to five Conservative seats are at risk of going over to the Bloc - that is, unless the Tories fund a new arena for the city. 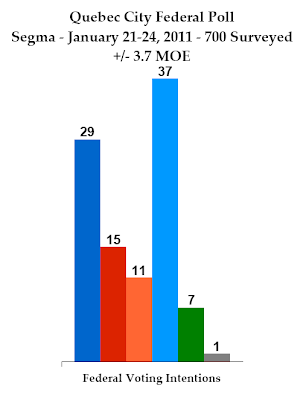 This telephone poll pegs the Bloc at 37% support in the region, up seven points from the 2008 election. The Conservatives are down nine points to 29%, while the Liberals are down one to 15%. The New Democrats are steady at 11%, not the 20% or so that CROP and Léger have found to be the case.

Again, methodology seems to be the difference maker here when it comes to the NDP in Quebec.

The poll shows that the Tories are not even secure in their "fortress" of Quebec City. But, the poll (quite excellently) asks how voting intentions might change if the Conservatives decide to fund the planned hockey arena for the city.

The Conservatives could potentially put all five of their seats in the region at risk if they don't fund it. Fully 23% of Conservative supporters in and around Quebec City would vote for another party if the funding doesn't come. That would drop the Conservatives to only 22%, and likely mean they would be swept from the city.

However, if they fund the arena 24% of people planning to vote for one of the other parties would switch to the Conservatives. Assuming they keep the support they currently have, that would bump them up to 46% in the city and almost certainly mean a sweep of all seven ridings.

The poll's breakdown by riding puts into perspective what is at stake for the Conservatives. 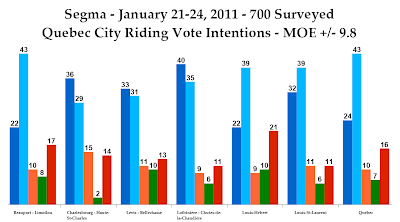 These riding polls have a margin of error of 9.8 points, meaning that four of the seven have a statistical tie between the Conservatives and the Bloc Québécois. The other three show a strong Bloc lead.

We'll start with Beauport-Limoilou, held by Conservative MP Sylvie Boucher. She won the riding in 2008 with 37% support to the Bloc's 33%, but this poll puts the Bloc in the lead with 43%. Boucher is 21 points behind at 22%, well outside of the margin of error. That's one seat gain for the Bloc.

In Charlesbourg - Haute-Saint-Charles, held by Conservative MP Daniel Petit, the Conservatives have a narrow seven point lead with 36%, ahead of the Bloc at 29%. The 2008 result was 41% to 29%, so it appears things haven't changed much in the riding. But with the MOE, this seat is potentially on the bubble.

Lévis - Bellechasse was won by Conservative Steven Blaney by a healthy 20 points in 2008, with 46% to the Bloc's 26%. But this poll shows an extremely close race: 33% for the Conservatives and 31% for the Bloc. Again, with the MOE this one is also on the bubble.

Lotbinière - Chutes-de-la-Chaudière, won by Conservative Jacques Gourde by a margin of 47% to 25% over the Bloc, is another close race. The Conservatives still hold the lead here, with 40% to 35%. But with a MOE of almost 10 points, this seat, too, is at risk.

Louis-Hébert, held by Bloc MP Pascal-Pierre Paillé, was won by a margin of eight points in 2008: 36% to the Tories' 28%. But the margin has widened to 39% for the Bloc to 22% for the Conservatives. The Liberals, at 21%, are vying for runner-up in the riding. This makes Louis-Hébert safe for Mr. Paillé.

Finally, the biggest surprise in this poll comes in Louis-Saint-Laurent. Josée Verner has been one of the best performing Conservatives in the region since 2004. She won in 2008 with 47%, ahead of the Bloc at 27%. But this poll puts the Bloc in the lead with 39%, ahead of Verner who is at 32%. That margin is within the MOE, but it is surprising to see this riding as a close race.

So, from five of seven seats, with these poll numbers the Conservatives would be reduced to three. The Bloc would pick up two and win five, but with the MOE the Bloc has the potential to win all seven seats. The results of the arena-funding poll argue that Conservative chances in the city may lie very heavily upon whether the new colisée gets built or not. This will surely make it more difficult for them to say no.
Posted by Éric at 9:58:00 AM