The newest poll from Harris-Decima shows that the Conservatives have pulled out of the close race that the polling firm had found in its late-2010 polling. But the party is still not in a position to make any gains. 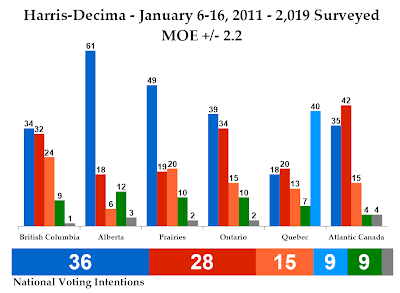 Since Harris-Decima's last poll taken in December, the Conservatives have gained five points and now lead with 36%. The Liberals have dropped only one point to 28%, while the New Democrats are steady at 15%.

The Bloc Québécois and Greens have both dropped two points to 9% nationally in this telephone poll, which has a margin of error of +/- 2.2.

That is a big gain for the Tories, and puts them generally where Angus-Reid and EKOS have recently pegged them. This poll from Harris-Decima is also very close to my own current projections.

In fact, the only outlier result to be found in this poll, if an outlier can be defined as a result with a difference from my own projection greater than the poll's MOE, is in British Columbia. There, the Conservatives lead with 34% (+2 from the last poll), while the Liberals are close behind at 32% (+11). That Liberal result is about three points higher than the poll's MOE should allow. The NDP is steady at 24%, while the Greens are down 12 points to 9%.

The Bloc has dropped four points in Quebec but still leads with 40%. The Liberals follow with 20% (-3), while the Conservatives are up seven to 18% and the NDP is up three to 13%. That about lines up with what the other pollsters have found this month.

The Liberals are leading in Atlantic Canada with 42%, with the Conservatives not far behind at 35%.

In the Prairies, the Conservatives lead with 49%. The NDP is in second with 20%, while the Liberals have dropped six points to 19%. 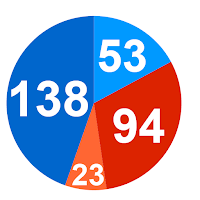 With these poll results, the Conservatives would win 18 seats in British Columbia, 27 in Alberta, 22 in the Prairies, 54 in Ontario, seven in Quebec, and nine in Atlantic Canada for a total of 138 seats. That is 13 more than my projection for Harris-Decima's last poll, thanks to a gain of seven seats in Ontario.

The Liberals would win 12 seats in British Columbia, one in Alberta, three in the Prairies, 40 in Ontario, 14 in Quebec, and 22 in Atlantic Canada for a total of 94 seats, seven fewer than last time. The drop came primarily in Ontario, where the Liberals lost eight seats (but they made small gains elsewhere).

The Bloc would win 53 seats in Quebec, three fewer than the last projection.

The Greens win no seats, compared to one that was projected from Harris-Decima's last poll.

Nothing really new in this poll, though it does give the Tories a bit of a bigger lead than either Angus-Reid or EKOS Research found to be the case. However, the difference is within the margin of error. The poll should embolden no one, least of all the New Democrats, who have been stumbling in the polls lately.
Posted by Éric at 2:33:00 PM