With January yet to provide us with a new poll (though that is likely to change tomorrow), what better time to take a last look at December through its best and worst case scenarios for each of the three main federal parties?

Let's start, as always, with the New Democrats. They did not have a stellar month, and this is reflected in their best case scenario. The party would win 24.1% of the vote, a high watermark for them, but would only win 40 seats. The Conservatives would win 139, the Liberals 80, and the Bloc Quebecois 49. In other words, more or less exactly what the situation in the House of Commons is right now.

The NDP would win 11 seats in British Columbia, one in Alberta, four in Saskatchewan and Manitoba, 17 in Ontario, two in Quebec, and five in Atlantic Canada. But with the jump in votes cast, the party would still only be making a tiny seat gain. 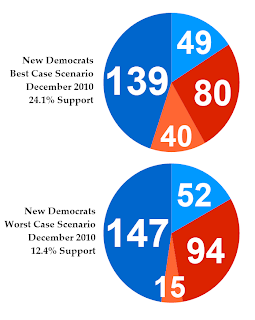 Their worst case scenario, however, is disastrous. With only 12.4% of the vote, the NDP would win only 15 seats, barely being recognized as an official party. The Conservatives would win 147 seats, the Liberals 94, and the Bloc Quebecois 52. Safe to say that Jack Layton would find himself out of a job.

The NDP would win two seats in British Columbia, none in Alberta, two in Saskatchewan and Manitoba, 11 in Ontario, none in Quebec, and none in Atlantic Canada.

For the Liberals, it was a relatively stable month. Their best case scenario would give them 32.4% of the vote and 110 seats, but not enough to propel them into a minority government. The Conservatives would win 129 seats, the Bloc Quebecois 51, and the NDP 18. This is an especially troublesome outcome as the combination of the Liberals and NDP would still be less than the Tory total.

The Liberals would win nine seats in British Columbia, two in Alberta, six in Saskatchewan and Manitoba, 48 in Ontario, 16 in Quebec, and 27 in Atlantic Canada. 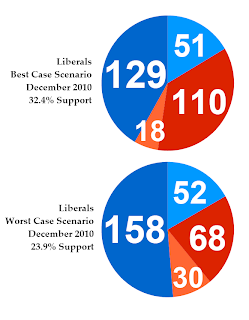 Their worst case scenario would make Stéphane Dion look like a political genius. With only 23.9% support, the Liberals would eke out 68 seats, almost handing the Official Opposition role to the Bloc Quebecois. The Conservatives would win a small majority with 158 seats, while the Bloc would win 52 and the NDP 30.

The Liberals would win seven seats in British Columbia, none in Alberta, one in Saskatchewan and Manitoba, 30 in Ontario, 12 in Quebec, and 16 in Atlantic Canada. It would be even worse than 2008.

The Conservatives would win 25 seats in British Columbia, 28 in Alberta, 23 in Saskatchewan and Manitoba, 64 in Ontario, nine in Quebec, and 12 in Atlantic Canada. A majority without Quebec - I didn't think it was possible. 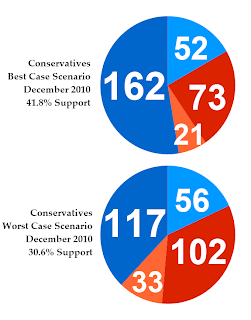 On the flip side, the Conservatives could be manhandled. But they would still come out on top, at least in terms of seats. With 30.6% support, the Conservatives would win 117 seats. The Liberals would win 102, the NDP 33, and the Bloc Quebecois 56. It would not be enough to hold on to the reins of government.

In this scenario the Conservatives win 18 seats in British Columbia, 25 in Alberta, 20 in Saskatchewan and Manitoba, 46 in Ontario, three in Quebec, and four in Atlantic Canada.

For the opposition, these are troubling results. The NDP can only make marginal gains or risk losing everything, while the Liberals could do worse than 2008 or still be behind the Conservatives if everything goes right. And a Conservative majority could also be possible.

For the Tories it is high risk, high reward. They could be ousted by a coalition, or they could form a majority. Both Jack Layton and Michael Ignatieff have shown, up to this point, that they aren't prepared to roll the dice with so much at stake. But is Stephen Harper a gambling man?
Posted by Éric at 8:48:00 AM