Angus-Reid is first out of the gate and has the distinction of being the first polling firm to report in 2011. Their last poll, taken in early December, virtually mirrored the 2008 electoral result. But this poll indicates that the Conservatives may have lost some ground over the holidays. 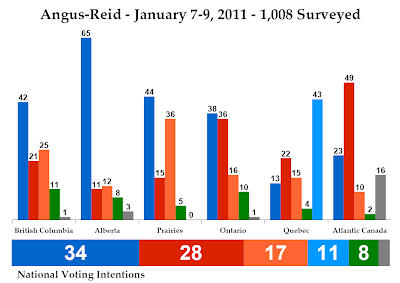 Compared to that last poll, the Conservatives are down four points to 34%, while the Liberals have gained two points and trail with 28%.

The New Democrats are down one point to 17%, while the Bloc Québécois and Greens have picked up a point apiece and stand at 11% and 8% respectively in this internet poll.

Regionally, the Conservatives have dropped six points in Ontario and now lead with 38%, followed closely by the Liberals at 36% (+5). The NDP is steady at 16% while the Greens are up two to 10%. It's a much closer race in the province than Angus-Reid indicated in December.

In Quebec, the Bloc has gained four points and dominates with 43%. The Liberals have pulled away from the federalist pack with a three point gain, running second with 22%. The NDP is down two points to 15% while the Conservatives have dropped five points to only 13% in Quebec. That is very problematic for them.

The Conservatives are up three points in British Columbia, however, and lead with 42%. The New Democrats follow with 25% (-5), while the Liberals are down four points to 21%. The Greens, at 11%, have gained seven points.

In the smaller-sample regions, we get some odd results due to the higher margin of error. For example, in Atlantic Canada the "Other" parties have stormed ahead of the New Democrats to 16% support, trailing the Conservatives at 23% (-18) and the Liberals at 49% (+11). The NDP is down seven points to 10%. But before you disregard this poll entirely, consider that these 16 "other" points only represent about 1.1 points nationally.

In the Prairies, the Conservatives are up seven to 44%, while the NDP has come out of nowhere with a 14 point gain. They stand at 36%, ahead of the Liberals (who are down nine) to 15%.

These smaller regional results leave a lot to be desired. But we can certainly take something from the polling data in the three largest provinces. 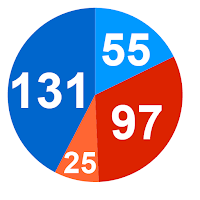 The Conservatives would win 22 seats in British Columbia with this poll, as well as 28 in Alberta, 22 in the Prairies, 49 in Ontario, four in Quebec, and five in Atlantic Canada for a total of 131. That's a drop of 18 seats from the projection for Angus-Reid's last poll.

The Liberals would win seven seats in British Columbia, none in Alberta, one in the Prairies, 45 in Ontario, 15 in Quebec, and 27 in Atlantic Canada for a total of 97, a gain of 20 seats from last time.

The Bloc Québécois would win 55 seats in Quebec, an increase of two.

The New Democrats would win seven seats in British Columbia, none in Alberta, five in the Prairies, 12 in Ontario, one in Quebec, and none in Atlantic Canada for a total of 25, down four from last time.

Jack Layton is the only leader whose numbers have improved. The gap between his approval and disapproval ratings has shrunk by four points, to 26% approving and 31% disapproving.

The first poll of the year is not without its issues, but it seems to indicate that the big gap that was forming between the Conservatives and the Liberals in December has been reduced back to what we've seen for the last year or so. Ho-hum.
Posted by Éric at 1:33:00 PM