A bit of a dry period, recently. Normally I have more polls that I can write about, but so far this month we've received only a few federal polls and virtually no provincial ones.

So, here's a new chart to add to the pile. I've compiled all of the provincial political polls going back to January 2010. Now, this chart requires a bit of explanation.

What I've done is averaged out all of the polling results each month, with polls that had field dates that straddled two months being part of the average for both those months. Months without any polls are considered to have the same levels of support for each party as the last month in which there was a poll. This gives us some straight lines that only shift once new polls appear.

The charts will be updated on a monthly basis.

The legend for this chart is at the bottom of this post. 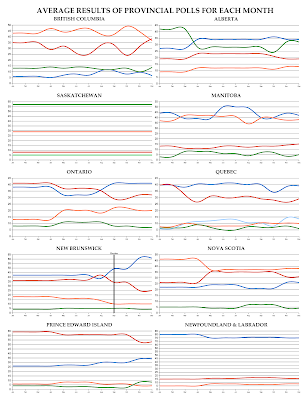