A new poll from EKOS shows that little has changed in the last two weeks. 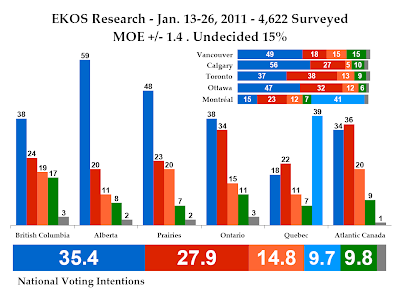 Compared to EKOS's last poll, the Conservatives have picked up 0.9 points and now lead with 35.4%. The Liberals are also up: 0.6 points to 27.9%. For those keeping score, that's an increase of the Tory lead by a tiny 0.3 points.

The New Democrats, however, are stable at 14.8%, well below where they need to be.

Note: Check out the EKOS PDF as they have a very neat breakdown of the differing results of various polling methods.

In British Columbia, the Conservatives are holding steady with 37.8% support, while the Liberals have picked up three points and are in second with 23.5%. The New Democrats have dropped four points to 18.9%, a result that is more likely than not on the low side. The Greens are at the opposite end, with a three point gain to 16.7%. The Conservatives are dominating in the Vancouver area, with 49.2%. The Liberals are running second with 17.9%.

Finally, in the Prairies things have reset themselves after the unusually close race of two weeks ago. The Conservatives are up 10 points to 48.1%, the Liberals are down nine points to 23.4%, and the NDP is up four points to 19.7%. That's more what you'd expect to see. 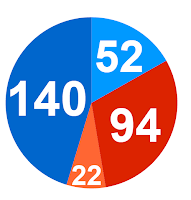 With the results of this poll, I would project the Conservatives to win 23 seats in British Columbia, 27 in Alberta, 21 in the Prairies, 51 in Ontario, seven in Quebec, and 10 in Atlantic Canada for a total of 140. That is a gain of four seats from my projection for EKOS' last poll, with the gains coming primarily in the Prairies and Ontario.

The Liberals would win 10 seats in British Columbia, one in Alberta, five in the Prairies, 42 in Ontario, 15 in Quebec, and 19 in Atlantic Canada for a total of 94, one more than last time.

The Bloc Québécois would win 52 seats in Quebec, unchanged from two weeks ago.

The New Democrats would win three seats in British Columbia, none in Alberta, two in the Prairies, 13 in Ontario, one in Quebec, and three in Atlantic Canada for a total of 22. That's down five from last time, in large part due to the sorry result in BC.

Generally speaking, this poll is very similar to my current projection.

But it had other interesting tidbits, too. Forty percent of Canadians would prefer that the next government be Conservative (28% said a majority, 12% a minority), while 37% said they wanted it to be Liberal (17% minority and 20% majority). That is surprisingly close, as is the poll on a Conservative government vs. a coalition government: 41% would choose the Tories (likely the party's ceiling in general), 39% would choose the coalition. One worrying note for the coalition, however, would be that they've narrowly lost Ontario to the Conservatives. Only Quebec and Atlantic Canada have a plurality who would prefer a coalition government.

So, more fuel for the election fire. Conservatives doing well enough, Liberals still in it, Bloc still up, NDP still at risk. One wonders if the speculation will continue for the next two months, which is when the budget is rumoured to be introduced. I'm not sure if that kind of rampant speculation can be sustained for eight weeks!
Posted by Éric at 12:16:00 PM