Liberals up, NDP down in new Abacus poll

Abacus Data released a new poll on Friday, showing movement between the Liberals and New Democrats. More to the point, it brings Abacus's data about even with everyone else's. 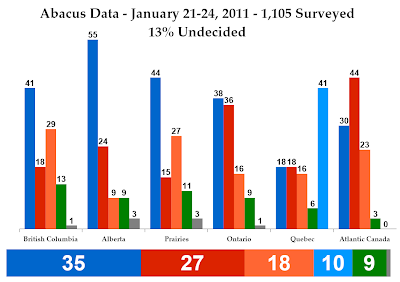 When we last heard from Abacus Data at the beginning of December, the Tories had an 11-point lead. The Conservatives haven't budged from their 35% result of that poll, but the Liberals have gained three and now trail at 27%. The New Democrats took the brunt of the Liberal gain, dropping two points to 18%.

The Bloc Québécois is steady at 10%, while the Greens are down one to 9% in this online poll.

The Tories still hold a tremendous lead among men, being favoured 41% to 26% over the Liberals. But the two parties are tied at 29% among women.

In Ontario, the Conservatives are steady at 38% while the Liberals are up six big ones to 36%. The New Democrats are down five points to 16%, while the Greens are down two to 9%.

The Bloc has gained one point in Quebec and leads with 41%, while the Liberals and Conservatives are tied and unchanged at a dismal 18%. The NDP is down one to 16%, but still performing well.

The Conservatives have gained six points in British Columbia and lead with 41%, while the New Democrats are up three points to 29%. The Liberals are down three to 18%. The Greens are also down, dropping one point to 13%.

In Atlantic Canada, the Liberals jump 11 points to 44%, while the Conservatives have fallen five points (30%) and the NDP three points (23%).

The Conservatives lead in Alberta with 55%, while the Liberals are up six points to 24%. The NDP is down four to 9%, tied with the Greens. 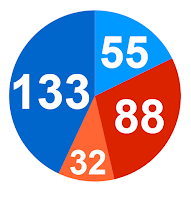 With the results of this poll, I would project 21 Conservative seats in British Columbia, 26 in Alberta, 22 in the Prairies, 49 in Ontario, seven in Quebec, and seven in Atlantic Canada for a total of 133. That is seven fewer than I projected for Abacus's last poll.

The Liberals would win four seats in British Columbia, two in Alberta, one in the Prairies, 45 in Ontario, 12 in Quebec, and 22 in Atlantic Canada for a total of 88, 11 more than last time.

The Bloc Québécois would win 55 seats in Quebec, one more than in the projection for the early December poll.

The New Democrats would win 11 seats in British Columbia, none in Alberta, five in the Prairies, 12 in Ontario, one in Quebec, and three in Atlantic Canada for a total of 32. That's a drop of five seats.

There's not much new in this poll, though it is a better result for the NDP than what we've been seeing from most other pollsters. However, Abacus's track record to date shows them as one of the better pollsters for the NDP, so the 18% comes with a big grain of salt.

New Projection Model in the Works

On a completely unrelated topic, rest assured that work is going on feverishly behind the scenes to develop a new seat projection model that will be capable of making individual projections for all 308 ridings in the country. The current projection model is far less sophisticated than the one I have in the works. But the current model does not merely rely upon simple vote margins or uniform swing, and that will continue to be the case for the new model. For every riding, the new model will take into account the presence of star candidates, of cabinet ministers, of the role of incumbency, of financing, and the individual voting histories of each and every riding. I will also be tracking smaller regional and city-wide polls and taking those into account. For example, though the new projection model is still in its preliminary stages, I'm able to project the vote in the Vancouver Region to be 45.7% for the Conservatives, 21.2% for the Liberals, 18.3% for the New Democrats, and 13.6% for the Greens.

The national and regional popular vote projection model, however, will not be changing. I believe it is sound, especially now that the age and margin-of-error of each poll is being weighted more accurately.

I've already started developing the new seat projection model, using British Columbia as my starting point. Geographically, it's the natural place to start. But it is also a province with many three-way races and pockets of support for each of the three main parties. It also isn't too large, so I can run some tests easily, but it also isn't too small or homogeneous that the tests would be meaningless. I will keep you all updated on how things are developing.
Posted by Éric at 4:34:00 PM