Rating the BC Liberal leadership contenders

Ipsos-Reid conducted a poll recently for Global Television in British Columbia. It was reported on in the Vancouver Sun here.

In general, it shows that Christy Clark and George Abbott appear to be emerging as the front runners, at least in the opinion of British Columbians. But parties, as the last contested federal Liberal leadership convention demonstrated, can make odd choices.

When asking all British Columbians, only Christy Clark and George Abbott come out with a net positive rating, with the other contenders all getting negative marks. BC Liberal voters are far more enthusiastic about their candidates, and give the best score to Ms. Clark with 60% having a positive impression of her compared to 15% who don't.

Abbott also gets a decent score, with a 38% to 11% split. Kevin Falcon is more divisive, as 33% of BC Liberal voters have a positive opinion of him compared to 24% who don't.

In terms of generating interest in voting for the BC Liberals, 26% of all voters said that Clark would get them most interested in voting for her party. That is boosted to 36% among people who voted Liberal in 2009, but is reduced to 16% among those who voted NDP. Abbott received scores of 12%, 18%, and 10%, respectively, while Falcon got 7%, 14%, and 4%.

But how can we take all of these numbers and rank the leadership contenders? I combined all of the rankings of the candidates for each of the questions in this poll, giving six points to the contender with the best score and one point to the contender with the worst score for each question, portioning out points in descending order in between. As one of the questions included whether a particular leadership candidate would decrease interest in voting for the BC Liberals, and since I included the response of BC New Democratic voters, this ranking should be looked at in terms of each contender's ability to draw votes from all sides of the political spectrum. A leader who does that is best suited to win an election campaign.

The following chart is NOT the result of the Ipsos-Reid poll, but my own ranking based on the results of the poll. 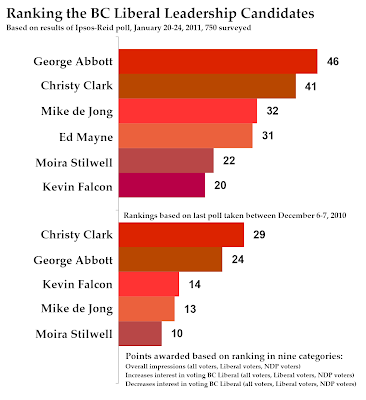 It's clear that Abbott and Clark are the two main contenders. While Clark gets good numbers from BC Liberal voters, she tends to do worse among NDP voters. They seem to prefer candidates like Abbott or Mike de Jong. Kevin Falcon, who does well enough among Liberals, does extremely badly among other voters. Unlike Clark or Abbott, he appears to be disliked outside of his own party. Clark is also divisive, but seems better able to draw non-Liberal voters into her tent.

Mike de Jong and Moira Stilwell also seem to benefit from a "none of the above" effect.

Comparing this to Ipsos-Reid's last leadership poll in December shows how much voter negativity Falcon brings to the table. That poll did not include whether a leader would decrease interest in voting for the BC Liberals, and that is primarily why Kevin Falcon has fallen from third to last in terms of suitability.

Now, this is not an indication of who will win the BC Liberal leadership race. Falcon has the support of influential people. But this seems to argue that the BC Liberals will have a better chance of winning the next provincial election with George Abbott or Christy Clark as leader, rather than Kevin Falcon.
Posted by Éric at 10:42:00 AM