Tories up, NDP down in new EKOS poll

The latest poll from EKOS tells a story similar to the one released by Angus-Reid two days ago. The Conservatives hold the lead, but it isn't the wide lead that seemed to have been forming in December. 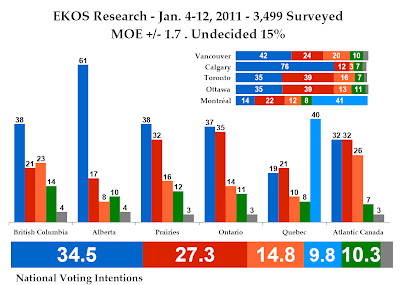 Of course, EKOS never found that the Tories were roaring ahead. So the fact that the Conservatives have gained 2.5 points from EKOS's last poll is of note. They now lead with 34.5%, ahead of the Liberals at 27.3% (+0.8).

The smaller parties take a step backwards, as the New Democrats are down 2.3 points to 14.8% and the Greens are down 0.6 points to 10.3%. The Bloc Québécois is also down a little.

The EKOS poll had a slew of other questions included, and I'll get to them soon. But first, the regional results.

The race has narrowed in Atlantic Canada, as the Liberals drop five to 32% and the Conservatives drop two to 31.8%. The NDP is miraculously back in it with a four point gain. They are now at 26.2%.

Big changes in Alberta, where the Tories are up 15 points to 60.6%. The Liberals are down nine to 17.2% while the NDP is down seven to 8.3%. The source of the gain seems to be in Calgary, as the Conservatives now lead there with 76.2%. The Liberals are second (barely), at 11.7% in the city. But, again, wouldn't it be more interesting if EKOS released the data from Edmonton?

In Saskatchewan and Manitoba, the Conservatives are down six points to 38%, followed closely by the Liberals at 32% (+9). The NDP is down nine points to 15.7%. I say we chalk up that Liberal bounce to the small sample size. 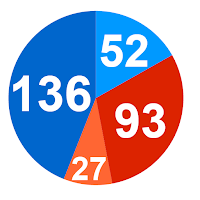 With the results of this poll, the Conservatives would win 22 seats in British Columbia, 27 in Alberta, 19 in the Prairies, 49 in Ontario, eight in Quebec, and 10 in Atlantic Canada for a total of 136.

The Liberals would win eight seats in British Columbia, one in Alberta, seven in the Prairies, 44 in Ontario, 14 in Quebec, and 17 in Atlantic Canada for a total of 93.

The New Democrats would win six seats in British Columbia, none in Alberta, two in the Prairies, 13 in Ontario, one in Quebec, and five in Atlantic Canada for a total of 27.

Now to the interesting tidbits in this poll. First off, Canadians are split as to whether they would prefer a Liberal or Conservative government. The Conservatives get the edge, however, as 39% (27% want a majority and 12% want a minority) would prefer a Tory government of some kind. The Liberals aren't far behind, with 37% wanting them to be in power (20% majority and 17% minority).

If we break it down by party, we get an indication of their supporters' enthusiasm. The Bloc's voters seem to be the most keen to go, as 47% want the next election to take place now or within the next four months.

Surprisingly, Liberal supporters are the next most enthusiastic group, as 39% want the election to take place soon. The NDP's voters are at about the same level, at 38%.

Conservatives, however, seem happy with the way things are. Only 19% want an election to take place soon. Perhaps they think another election would just be a waste of time, or perhaps they sense an element of risk.

Another interesting question was on the subject of what motivates a voter into making their political choices. A party's platform appears to be the most important, as 44% of respondents chose it as their deciding factor. Another 19% think the leader is most important, while 16% make their decision based on the local candidate.

There were no significant variations by region or party on this issue.

Finally, EKOS also asked whether people would prefer a Conservative government or a coalition government. Note: EKOS did not say that the Tory government would be a majority (which is what I read somewhere), but did stipulate that the coalition would be between the Liberals and the New Democrats and be led by Michael Ignatieff.

It doesn't appear that the coalition is the scary idea the Conservatives are hoping it is. The question said nothing about voting choices, but rather if you were "forced to choose". Nevertheless, while it isn't a bogeyman, the idea of a coalition benefits the Tories. They picked up about five points on the question, while the Liberals and New Democrats lost three. And what's more, if the Conservatives get 40% but the Liberals and New Democrats split the other 39%, that's a ticket to a Tory majority.

It's a high risk game, however. If the Tories campaign strongly on the coalition, it will give the other parties the legitimacy to form one after the election if the numbers work out in their favour. Perhaps Stephen Harper realizes that, come what may, this will probably be his last campaign as leader of the Conservative Party. If he wins his majority, one wonders whether he would want to lead the party through another election in 2015 or 2016. If he doesn't, and is replaced by a stable coalition, he may not want to be opposition leader until then.

If it's an all or nothing gamble, it seems like the right time to do it.

There will be a projection update on Monday. So check The Globe and Mail website on Monday morning, or buy a copy of their print edition to see a cliff notes version of the latest projection. I will post later in the day on Monday or Tuesday with the details of the update. Have a great weekend!
Posted by Éric at 4:17:00 PM