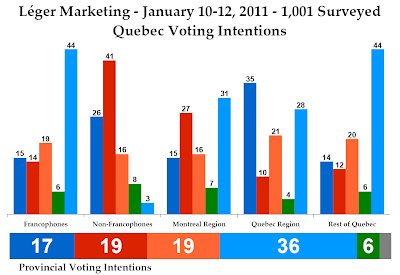 Compared to Léger's last poll in early December, the Bloc Québécois has gained two points and now leads with 36%. That is actually a little lower than the other pollsters have reported, which can probably be explained by the high New Democratic result: 19%, though that is two points down from a month ago. Léger continues to poll well for the NDP, but it is difficult to determine where exactly support for Jack Layton's party stands.

The Liberals are also at 19%, and have also lost two points. The Conservatives are down two as well, to 17%, while the Greens are up one to 6%.

The Bloc has gained ground among francophones, and leads among this linguistic group with 44% (+2). The NDP follows with 19% (-3), while the Conservatives have also dropped three points, to 15%. The Liberals are steady at 14%. Being so low among francophones is very bad news for the Liberals, and the NDP continues to impress.

Among non-francophones, the Liberals have dropped six points but still lead with 41%. A bit of good news for Larry Smith's chances in Lac-Saint-Louis is that the Conservatives have gained four points among non-francophones, and is now second with 26%. Things could get interesting on the West Island (for once). The NDP is down one to 16%, while the Bloc is down three points to 3%.

It would require more sampling, but it would be interesting if the "non-francophones" were broken down by whether they speak English or not.

In the Montreal region, the Bloc is steady with 31%, followed by the Liberals at 27% (-1). The Conservatives, despite their gain among anglophones, are down one point around the metropolis and are at 15%. The NDP has dropped four to 16%.

The Conservatives have made a big gain around the provincial capital, jumping 10 points to 35%. The Bloc has lost eight points and trails with 28%, while the NDP is down one to 21% - a very high result. The Liberals are completely out of it here, down two points to 10%.

What this means is that the Liberals appear to be losing ground everywhere in Quebec, and will only have some good performances in the non-francophone parts of Montreal. But with the Conservatives performing well, they could make some noise in that reddest of all regions. They will also do well in Quebec City, but it appears that the fight in francophone Quebec could increasingly be between the Bloc and the NDP, though the Bloc still has a huge advantage. 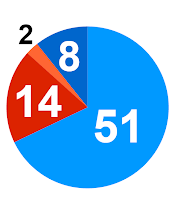 The Bloc Québécois would win 51 seats with these results, unchanged from Léger's last poll. The Liberals drop one to 14 seats, the Conservatives gain one and would win eight seats, while the NDP is unchanged at two seats.

But Quebecers aren't too excited about going to the polls. Only 37% want an election to take place in 2011, compared to 46% who don't. This is probably because 47% of Quebecers believe the result will be a Conservative government (11% see a majority, 36% see a minority). Still, 27% think it will be a Liberal government (6% majority, 21% minority), and a few wild-eyed respondents thought it would be a New Democratic government.

Now on to the provincial scene. Here, the two main parties have lost a little ground but the Parti Québécois has increased its lead by three points. Since that last poll in December, the Parti Québécois has lost one point but still leads with 36%. The Liberals (PLQ) are down four points to 29%, while the Action Démocratique du Québec has gained three points, and are third with 14%.

We are starting to see the ADQ get back to its traditional levels of support after the turmoil that took place after Mario Dumont's departure.

The Liberals are still doing very well among non-francophones, leading with 64% (-2). The PVQ is second with 12% (unchanged), while the ADQ has gained two points and stands at 10%.

The PLQ uses this lead among non-francophones to have the edge in the Montreal region. They are ahead with 38% (+3), though the PQ is not far behind at 34% (+2). The Greens are running third with 9%, unchanged from December. Troublesome for Québec Solidaire is that they have dropped three points to 7% on and around the island.

In Quebec City, the ADQ is up 11 points to 39%, mimicking the Conservative gain in the region. The PQ is down nine points to 28%, while the Liberals are down one to 19%. 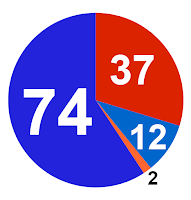 With this poll, the Parti Québécois would win 74 seats, two more than the projection for Léger's last poll. The Liberals would win 37 seats and the ADQ 12, both parties surrendering one to the PQ. Québec Solidaire would win two seats, unchanged.

The Liberals currently have 65 MNAs, the Parti Québécois 52, the ADQ four, and Québec Solidaire one. There are also three independents.

When it comes to who would make the best Premier, Pauline Marois is on top with 17% (which becomes 29% when portioning out the undecideds). Jean Charest and Gérard Deltell are second with 15% (25%), while Amir Khadir of QS punches above his weight with 11% (19%). Claude Sabourin, the new leader of the Greens, clocks in at 1%.