Another week in the NDP leadership race has passed, with the debate in Halifax ushering in a spate of endorsements from the provincial NDP in Nova Scotia. But thanks to a handful of caucus endorsements from Ontario, both Paul Dewar and Niki Ashton have made important gains in the endorsement rankings. 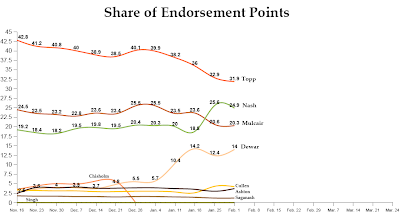 Paul Dewar landed the most valuable endorsements, getting the support of Ontario MPs Irene Mathyssen (London-Fanshawe) and Claude Gravelle (Nickel Belt). Mathyssen is a three-term MP, while Gravelle has been elected twice. In all, that gives Dewar an extra 12.5 points. Add to that the endorsement of Maurice Smith, a Nova Scotia MLA, and Dewar has made a gain of 13 points this week.

This has bumped him up 1.6 percentage points to 14% of those currently available. This still puts him below the 14.2% he reached in mid-January.

Like Nathan Cullen last week, Niki Ashton has re-emerged with a caucus endorsement of her own: Carol Hughes, two-term MP from Algoma-Manitoulin-Kapuskasing. This gives Ashton an extra five points, bumping her up 0.7 percentage points to 3.7%. She is still behind Cullen, but is moving away from Roméo Saganash, who is unchanged at 1.2%, and Martin Singh.

The top three ranking candidates also landed new endorsements, but only Paul Dewar and Niki Ashton made gains in their share of the points.

Thomas Mulcair received the endorsement of St. John's South-Mount Pearl MP Ryan Cleary, who had originally endorsed Robert Chisholm. Cleary is in his first term and gives Mulcair an extra 2.5 points, but he still loses 0.3 percentage points. He now sits at 20.3%, his lowest of the campaign so far.

Peggy Nash received the endorsement of three Nova Scotia MLAs, Pam Birdsall, Vicki Conrad, and Marilyn More, the last of which had endorsed Chisholm while he was still in the race. This gives Nash an extra 1.5 points, but she has slipped 0.7 percentage points to 24.9%.

Brian Topp also got the nod from some Nova Scotia MLAs while in the province, getting the support of Lenore Zann and Mat Whynott (who had endorsed Chisholm). This gives him an extra point, but he is down a percentage point to 31.9%.

The four frontrunners are beginning to bunch-up in the endorsement rankings, which also seems to be the case in the race itself. There are only 17.9 percentage points separating first (Topp) from fourth (Dewar) in the rankings, compared to the 18.3 points that separated first (Topp) from second (Mulcair) when I launched them.

Nathan Cullen and Niki Ashton are also beginning to lift themselves up after trailing for so long. And while Cullen has been getting the most positive press recently, it's worth noting that Ashton currently has as much caucus support as Dewar (four MPs), and the support of only two fewer sitting MPs than Nash. It is experience that makes the difference, however. Ashton's caucus support (excluding herself) has won a total of five elections, the same as Cullen's, whereas Nash's has won eight and Dewar's 11.

By comparison, Topp's caucus support has won 28 elections while Mulcair's has won 40 (but most of those were in Quebec).

The race is far from over and in many ways it is just beginning. With the debates starting to now take centre stage, what came before were almost the preliminary rounds. The candidates were lining up endorsements, getting a feel for the race, and preparing their organizations. They only have a few more weeks to sign-up new members. The debate in Halifax provided more contrast between the candidates than the ones that came before it, and I suspect future debates will serve to separate the contenders more and more. But by the time the race approaches the convention, it's quite possible that the frontrunners will be even closer together in support than they appear to be today.
Posted by Éric at 9:25:00 AM