CTV released a new poll by ThinkHQ Public Affairs for the Alberta provincial election last week, and it echoes what some other polls have been showing. Also released last week were a few riding polls for Lethbridge, indicating that the Tories are on track to sweep the city after it was closely contested in 2008. 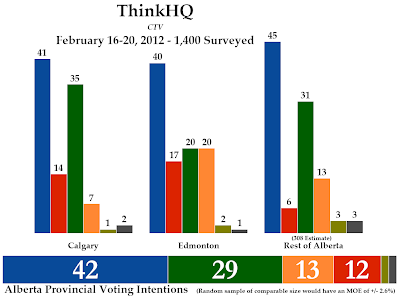 ThinkHQ found that the Progressive Conservatives lead with 42%, 13 points up on Wildrose who trail with 29%.

The New Democrats come in third with 13% while the Liberals are fourth with 12%.

This poll was added to the projection on February 25.

This seems to give further indication that the race in Alberta is much more competitive than some other polls have suggested. Nevertheless, the Progressive Conservatives are very comfortably ahead.

Their widest lead is in Edmonton, where the Tories have 40% support to 20% for Wildrose and the NDP. The Liberals trail with 17%.

The margin between the PCs and Wildrose is only six points in Calgary, with 41% to 35%. The Liberals are third with 14% while the NDP stands at 7% in the city.

I reverse-engineered the results in the rest of Alberta as ThinkHQ did not provide them in their report. By my estimate, this poll would have put the Tories at 45% outside of the two main cities. Wildrose would be at 31%, the NDP at 13%, and the Liberals at 6%. I emphasize that this is an estimate, but it should be correct to within a point or three.

We've heard from Lethbridge College before. Polls being produced by colleges and universities are wonderfully common in the United States, but unfortunately Lethbridge College seems to be the only Canadian school that regularly puts out polling data. They polled the two ridings in Lethbridge, of note due to Bridget Pastoor's floor-crossing from the Liberals to the Tories in 2011. 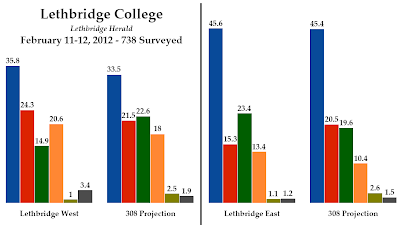 The chart compares the results of the Lethbridge polls to the current projections for these ridings. They line-up generally well, and aside from the NDP in Lethbridge East and the "Others" in Lethbridge West are all within the projected ranges. But since the results for the NDP and the Others in these two ridings are not within the ranges, I will be adding this riding poll to the projection. I have not done so yet, so this comparison between poll and projection does not include the riding poll data.

Riding polls are added to the projection to provide a benchmark for adjustments going forward. The projections for Lethbridge East and West will be weighted to partially include this poll, whose data will be adjusted as voting intentions shift at the regional level. In other words, riding polls are not added as a snapshot in time but rather a starting point for further shifts in support.

The poll itself shows that in Lethbridge West the Tories lead with 35.8%, well ahead of the Liberals (24.3%) and the NDP (20.6%). Compared to the 2008 election, however, the Tories are down eight points and the Liberals are down 11. Both Wildrose and the NDP have more than doubled their support, an indication of the changing landscape province-wide.

In Lethbridge East, Pastoor has taken a lot of her support with her to the Tories, as she stands at 45.6% to 23.4% for Wildrose and only 15.3% for the Liberals. The PCs have picked up six points since 2008 while the Liberals are down a whopping 31. But it appears likely that, as a result of Liberals moving over to the Tories, some Tories have moved over to Wildrose - they are up 17 points. The NDP is also up from 6% to 13.4%.

From a projection stand-point, I'm quite pleased that the mechanism I have for estimating the support of floor-crossers has worked so well in Lethbridge East.

Both the ThinkHQ and Lethbridge polls show that the Progressive Conservatives are still very much in control of the situation and that their brand is strong. But it also shows that Wildrose's increase in support is very real - from 7% and 6% in Lethbridge West/East they have gone to 15% and 23%, respectively. If this sort of increase occurs across the board, Wildrose will be able to do very well in ridings in which they have a solid base of support.

What these polls also show is that the race for third is not going well for the Liberals. Provincially they are at risk of dropping behind the NDP in the popular vote, as well as the very real possibility they will be the fourth party in the legislature when the dust settles. Their support in Lethbridge, just one example, has plummeted from 35% and 46% in the two ridings to only 24% and 15%. Considering the margin of error, they also at risk of falling behind the NDP in Lethbridge, after outpacing them by between 25 and 40 points in 2008. The race at the bottom may mark a shift in Alberta politics just as much as the race for the top.
Posted by Éric at 9:09:00 AM