This past week was an important one for Thomas Mulcair, as he captured more of Robert Chisholm's endorsements and received his first nod from a major labour organization. 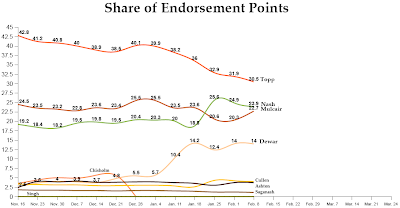 Two debates were also held by local bodies of the NDP in Sudbury over the weekend and last night in Saskatoon. Fundraising details were also released, indicating that Brian Topp and Thomas Mulcair are well ahead of the others, while Nathan Cullen is closer to the group of frontrunners than he is to the second tier of candidates.

But on the endorsement front the week was a good one for Thomas Mulcair. He got the endorsement of four Nova Scotia MLAs, Graham Steele (Finance Minister), David Wilson, Ross Landry, and Brian Skabar. The first three had endorsed Chisholm when he was still in the race.

Mulcair also picked up the endorsement of former Ontario NDP leader Howard Hampton, who had also endorsed Chisholm. Mulcair has now gobbled up four of Robert Chisholm's endorsements, more than any other candidate (Peggy Nash and Topp have one apiece).

Most important, however, is the endorsement of the United Food and Commercial Workers, the largest private sector union in Canada representing some 250,000 members. It's important because it is Mulcair's first major labour endorsement, finally putting him in the company of Topp, Nash, and Paul Dewar, all of whom have received the endorsement of large labour unions.

The next biggest gainer this week was Paul Dewar, who received the endorsement of the International Association of Machinists and Aerospace Workers, a 39,000-strong union, as well as the support of former Victoria MP John Brewin.

Niki Ashton received the nod from Michael Sather, a BC MLA, while Peggy Nash got the support of Sharon Blady, an MLA from Manitoba. 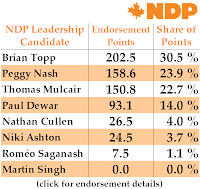 Paul Dewar has not budged from 14% of all endorsement points, while Nathan Cullen is down 0.2 points to 4%. Ashton is unchanged at 3.7%, while Roméo Saganash is down 0.1 point to 1.1%. Martin Singh remains stuck at zero points.

Endorsements and fundraising seem to point to Topp, Nash, and Mulcair being the top three in the race, with Mulcair perhaps being better positioned than Nash. They also seem to point to Dewar being in fourth spot, but he is one of the candidates that has the most second (and subsequent) ballot potential. A candidate like Mulcair may not have as much second ballot potential, meaning he has to pile up as much support on the first ballot as possible. But Michael Ignatieff demonstrated how limited late ballot growth can be in the 2006 race.

Worth noting is that Martin Singh raised more money than either Ashton or Saganash (though virtually all of it seems to have come from the Sikh community). He will obviously get more than zero per cent of the vote and I imagine Saganash will do better as well.

The one candidate I think the endorsement rankings is underestimating the most is Nathan Cullen. He had some impressive fundraising figures when compared to the others. He was only a few thousand dollars behind Paul Dewar. He's been getting some of the best press as well, so he could very well be much closer to the four frontrunners on the first ballot than the rankings might suggest. Whether he has a chance to emerge as the winner, however, is another thing entirely.
Posted by Éric at 9:52:00 AM