I'm catching up a little with this Ipsos-Reid poll done for Global News earlier this month, but its findings are worth taking a peek at. 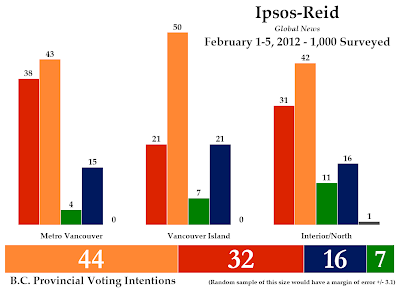 This poll was conducted well before Premier Christy Clark dropped B.C.'s budget this week. Heavy on restraint, the budget could lure some B.C. Conservatives back to the B.C. Liberals, but whether it will be good enough to hold the centre for the Liberals remains to be seen.

The B.C. New Democrats led with 44% in this survey, well ahead of the Liberals at 32% and the Conservatives at 16%.

Ipsos-Reid was last in the field between September 28-October 3 of last year, and since then the NDP has slipped only one point.

But the Liberals have dropped six, demonstrating the big problem for the party of late. The NDP has not roared ahead so much as the Liberals have fallen behind, primarily to the benefit of the Conservatives, up four since last autumn. 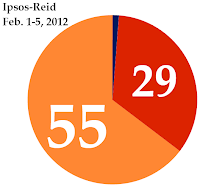 With these levels of support, the B.C. New Democrats would win 55 seats and form a majority government, with the B.C. Liberals winning 29 seats and the B.C. Conservatives only one.

This poll has good personal numbers for Clark, however. Her approval/disapproval rating is split at 47%, but she scores 31% on the Best Premier question, compared to 25% for Adrian Dix. He has the better approval rating, though, at 45% to 36%.

John Cummins of the Conservatives has an approval rating of 24% to 29% disapproval, with only 11% saying he would be the best person to be Premier.

But with the new budget, British Columbia could be in flux. The Liberals have been trying to portray Dix as a profligate spender, and now with a very fiscally conservative budget on the books they are at least in a position to cast themselves in a different light by comparison. We'll find out in the coming months whether it will stick, and whether British Columbians are in the mood for austerity in the first place.
Posted by Éric at 3:31:00 PM