Four candidates picked up major endorsements over the last week as the campaign enters its final stage. Thomas Mulcair made the biggest splash, however, gaining support from a former premier and a slew of party luminaries in British Columbia and Saskatchewan. 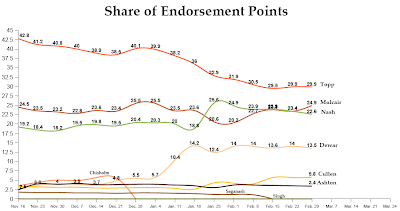 The biggest name added to Thomas Mulcair's campaign was that of former British Columbia Premier Mike Harcourt, who led the province from 1991 to 1996 and the provincial party from 1987 to 1996. Mulcair also received the endorsements of a great deal of other party members in the province, but none that are recorded in this system.

Saskatchewan also plumped for Mulcair in huge numbers, with four former Saskatchewan MPs (John Burton, Ron Fisher, Vic Althouse, and Ray Funk) recorded in the rankings. Mulcair got the support of several former MLAs as well, some of them former cabinet ministers, but the eight points he gained from these four former MPs should represent his new-found Saskatchewan support well enough.

Brian Topp also landed some important endorsements this past week, gaining the support of the 130,000-strong Communications, Energy, and Paperworkers Union of Canada. He also received the endorsements of Rachel Notley, an NDP MLA from Alberta, and Warren McCall, an NDP MLA from Saskatchewan. These are, to my knowledge, the first provincial legislators from these two provinces to make an endorsement.

Nathan Cullen expanded his support outside of British Columbia with the endorsements of former Ontario MP Lynn McDonald and the current Manitoba Minister for Healthy Living and Seniors, Jim Rondeau. 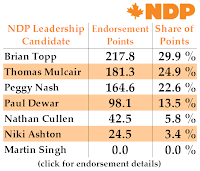 Thomas Mulcair has gained 18 endorsement points and has surpassed Peggy Nash to re-take second spot. He now has 24.9% of the points, a gain of 1.5 percentage points since last week. This is his highest share since January 4.

Peggy Nash gained one endorsement point but dropped 0.8 percentage points to 22.6%, her lowest share since January 18.

Paul Dewar did not gain any endorsement points and so dropped by 0.5 percentage points to 13.5%, his lowest mark since January 25.

Nathan Cullen gained 2.5 endorsement points to reach 5.8%, his highest share of the campaign so far, while Niki Ashton dropped to 3.4%. Martin Singh remains without a single endorsement point.

When Forum polled Quebecers recently, they asked who they would like to see as the next leader of the NDP. The result may (not) shock you. 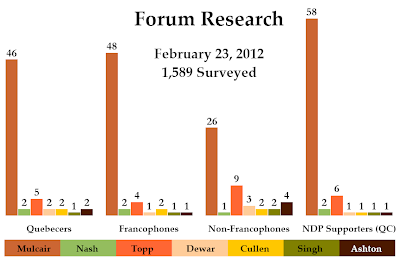 While Brian Topp may very well be doing better among the NDP's membership in the province, he does not pose much of a challenge for the hearts and minds of Quebecers. Though he is within the MOE of the other candidates, he is the consensus second choice with 5% support among Quebecers, 4% among francophones, 9% among non-francophones, 6% among NDP supporters, and 9% among decided NDP supporters.

Though it seems unlikely that Thomas Mulcair will get the support of as much as 82% of the NDP's 12,000+ members in Quebec, he is probably going to receive a comfortable majority of the province's support. That puts him in a strong position, particularly considering his inroads this week in British Columbia and Saskatchewan, home to 50,000 NDP members. I do believe that the endorsement rankings are correct in making Brian Topp the "establishment" favourite, but Mulcair is probably alone at the top among the members as a whole. There are still a few debates to go and Mulcair's campaign is set to announce another caucus endorsement at noon today. The race continues.
Posted by Éric at 9:53:00 AM