Tories lead by 22 in ROI poll

Over the last few days, Return on Insight (ROI) has released a series of Alberta polls via the CBC, analyzing voting intentions, leader approval, and where Albertans stand on the issues. The poll shows the Progressive Conservatives to be in a dominant position. 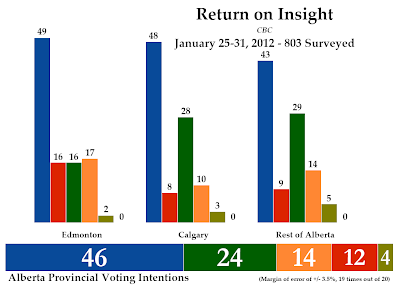 ROI finds Alison Redford's Tories to have the support of 46% of Albertans, with 24% opting for Wildrose, 14% for the NDP, and 12% for the Liberals.

These numbers generally echo, or at least fall in between, what we've recently seen from Léger Marketing and Forum Research. They also agree on where the parties stand in each part of the province.

In Edmonton, the Tories have a solid lead with 49% support, while the NDP comes up second with 17%. The Liberals and Wildrose are tied with 16%.

In Calgary, the Tories have a solid lead as well but are being trailed more closely by Wildrose: 48% to 28%. This is also the case in the rest of the province, where the Progressive Conservatives hold a 43% to 29% edge over Danielle Smith's party. This closer race outside the cities and a competitive Wildrose in Calgary is what other polls have reported.

This poll has been added to the Alberta projection. It has given the Tories an extra 0.6 points and they now lead with 45.9% support, compared to 23% for Wildrose (down 0.2), 13.1% for the Liberals (down 0.3), and 12.4% for the New Democrats (up 0.2). Minor shifts, but thanks to gains of 1.8 points in Edmonton and 1.5 points in Calgary, the Progressive Conservatives are now projected to win 76 seats, with seven going to Wildrose, three to the NDP, and one to the Liberals.

In this ROI poll, the leaders all get net positive approval ratings. Alison Redford tops the list with 59% approval to 22% disapproval, with her best numbers coming in the two main cities and among women.

Danielle Smith has a 46% approval rating with 26% disapproving, her best results coming in Calgary and among men.

Brian Mason of the NDP scores a 39% to 29% split while Raj Sherman manages 37% approval to 33% disapproval. Both leaders have their best results in Edmonton.

Glenn Taylor of the Alberta Party has the highest "unsure" result, but still got 24% approval to 10% disapproval.

These are not particularly strong indicators for Wildrose. They are not making big gains in voting intentions and on the important issues Albertans think other parties are stronger. If the campaign is about healthcare or education, the NDP might make gains. If it is about the economy, the PCs are best positioned. Where Danielle Smith finds her niche is difficult to see. But it appears that Albertans are generally comfortable with the Tories. Wildrose will need to turn the population against the governing party before they can work on bringing new voters into their tent.
Posted by Éric at 2:04:00 PM