NDP widens lead in BC

Two polls taken at the end of January by Forum Research and Angus-Reid indicate that the B.C. New Democrats have pulled further ahead of the governing Liberals. And with support for the B.C. Conservatives continuing to ride high, Christy Clark is unequivocally on track to lose the next election. 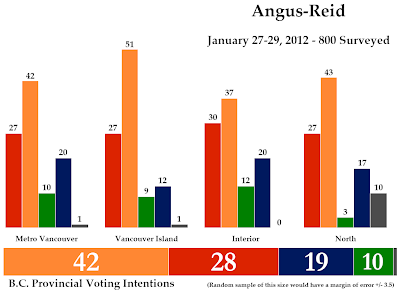 The poll by Angus-Reid gives the NDP the widest lead at 14 points, with Adrian Dix's party at 42% to 28% for the B.C. Liberals. The Conservatives stand at 19%, while the Greens trail with 10%.

Angus-Reid was last in the field October 31-November 1, and since then the NDP has gained two points. The Liberals are down three while the Conservatives are up one.

The New Democrats lead in every part of the province, with 42% in Vancouver, 51% on Vancouver Island, 37% in the Interior, and 43% in the North. They have made substantial gains on Vancouver Island and in northern British Columbia since Angus-Reid last reported.

The Liberals have dropped substantially in the north, and are stuck at between 27% and 30% throughout the province. The B.C. Conservatives are doing well everywhere but on Vancouver Island, and are even seven points behind the Liberals in Vancouver. They have outpaced the Greens for third spot throughout British Columbia.

His personal numbers aren't as good as those for his party: 26% think he is the best person to be premier. Clark is not far behind with 22%. Dix's approval ratings are positive, however, with 45% approval to 36% disapproval. Clark (40% to 49%) and Cummins (23% to 39%) have negative approval ratings. 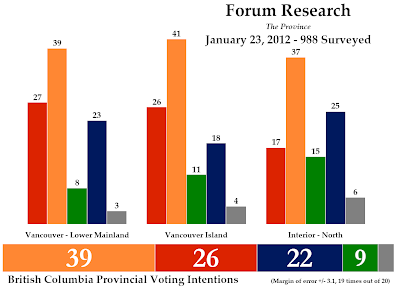 The poll by Forum Research is somewhat older, but finds some similar results. The B.C. New Democrats lead with 39% to 26% for the B.C. Liberals, while the B.C. Conservatives are solidly in third with 22%.

Since Forum was last in the field on December 15, the NDP has gained five, the Liberals have gained three, and the Conservatives have dropped one.

Liberal support is also at a similar level as Angus-Reid, but one difference is in the Interior-North region. There, Forum sees the B.C. Conservatives at 25% to 17% for the Liberals. Dropping into third in this part of the province would be a disaster for Christy Clark.

Also like Angus-Reid, Forum has positive approval ratings for Adrian Dix (though, at 35% to 34%, narrowly so) while Christy Clark (34% approval to 46% disapproval) and John Cummins (21% to 35%) have negative numbers. 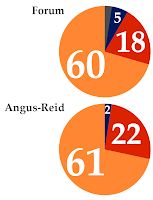 The projected seat results for these two polls are relatively similar, giving us a good idea of where things stand right now.

But in both scenarios we see a massive two-thirds NDP majority for Adrian Dix, thanks in large part to John Cummins. In fact, if we look at the polling trends over the last two years we see that the B.C. Liberals have returned to the levels of support they had in their last months under Gordon Campbell. Christy Clark's honeymoon, in which her party pulled ahead, is clearly over. Since at least January 2010, the B.C. New Democrats have out-polled the B.C. Liberals for most of the time, suggesting that it will not be a simple task for Christy Clark to right the ship.
Posted by Éric at 8:35:00 AM