A relatively quiet week on the endorsement front was compensated for by the release of the number of NDP members eligible to vote in the leadership contest. Party membership ballooned to almost 130,000 members, but the party did not hit the 20,000 members in Quebec that Thomas Mulcair targeted. Instead, a little over 12,000 members from Quebec will be eligible to vote for the next leader of the NDP, a slightly smaller group than the number of people who voted in the Bloc Québécois leadership race in December. 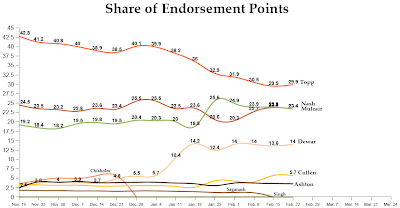 As for the endorsements, Brian Topp landed some new ones this week, the first time he has received some extra points in my rankings for quite awhile.

He received the support of former Manitoba MP Rod Murphy as well as Nova Scotia MLA Gary Burrill. The endorsement of two former BC MPs, Lynn Hunter and James Manly, was also added to the rankings. I can't find any announcement of when these endorsements took place, but they were mentioned in a rundown of Brian Topp's endorsements from British Columbia this week.

Paul Dewar also landed two significant endorsements: Hélène Laverdière, the MP from Laurier-Sainte-Marie, and Hoang Mai, MP for Brossard-La Prairie. They are both rookie MPs from Quebec but they are also some of the brighter ones from the province. They certainly help with Dewar's stature in Quebec after questions about his French.

Nathan Cullen received the endorsement of Taras Natyshak, an MPP from Essex in Ontario. Along with Brian Masse, this is Cullen's second endorsement from the province.

Thomas Mulcair also received the endorsement of Charles Taylor, a very well known academic in Quebec and a former candidate for the NDP. He isn't recorded in my rankings, but it is definitely an important endorsement in the province. 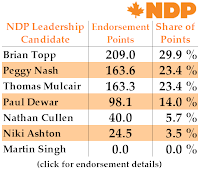 This is a little difficult as some of the endorsers (i.e. national unions and federal leaders) aren't defined regionally. In those cases, their points have been portioned out proportionately according to the membership numbers across the country.

Taken together, Brian Topp's big advantage in endorsements in British Columbia, along with good support in Saskatchewan, Alberta, and Manitoba help him take 33.8% of endorsement points when weighted for regional membership totals. This shows how key British Columbia is in this race.

Peggy Nash's support in Ontario and Alberta allow her to place second comfortably with 24.7% of weighted endorsement points.

The high level of caucus support Thomas Mulcair has in Quebec, however, does not give him much as the province represents less than 1 in 10 members. He places third in the weighted share of endorsement points with 16.7%, while Paul Dewar places fourth with 15.1%.

Nathan Cullen ends up with 6.4% of endorsement points while Niki Ashton gets 3.3%.

But based on the polling that has been released, it would appear that Thomas Mulcair is doing much better than this - which should come as no surprise. Quebec doesn't have as large a share of the NDP's membership as its population and representation warrants, but some members from across the country are undoubtedly recognizing Mulcair's strength in the province and the importance of Quebec to the NDP's future. This is one reason why the endorsement points system is somewhat abstract. It doesn't merely represent the ability of an individual to sign-up new members or pull-in support on voting day. It also accounts for the significance endorsements can have. Does a member in British Columbia care that the MP for a rural francophone riding in Quebec supports Thomas Mulcair? Probably not. Does he or she care that Mulcair has the largest amount of caucus support? Maybe.

If Brian Topp does end up with less than 20% support on the first ballot, as the internal polls from the Dewar and Mulcair campaigns suggested, he will have seriously under-performed expectations. From all of the information that is available (internal polls, polls of supporters, fundraising, membership numbers, endorsements, buzz) it seems relatively clear that if the vote were held today Thomas Mulcair would end up on top with some 25% to 30% support, while Peggy Nash and Paul Dewar would place strongly in the second tier somewhere around 20%. Nathan Cullen looks like he'll have solid support in the low-to-mid teens.

But where Topp ends up is the mystery - could he really have first ballot support in the mid-teens, after having the best fundraising totals and extensive establishment support? The placement of the other four major candidates seems far more predictable, but where Topp finishes could be far more important. Topp is seen to be closer to Peggy Nash on the spectrum and both are based in Toronto. But there's also some talk about the need to have a Quebecer, either Mulcair or Topp, as the next leader. If he is placed second to Mulcair on the first ballot, will he get subsequent ballot support from Nash's voters? If he is placed nearer to the bottom, will his supporters swing to a fellow Quebecer, or will he bolster Nash's chances?

With four candidates almost splitting the vote between them, and with a fifth (Cullen) seemingly having a good chunk of support as well, the final result is difficult to predict. Add to that the pre-determined preferential ballot and the voters who will cast their ballots the day of the convention and things are wildly unpredictable. Imagine a situation where Paul Dewar is the consensus second choice on the preferential ballots submitted before the convention but he makes a mistake in the final days or throws his support to another candidate on the convention floor. He would still be the consensus second choice on the ballots that are already locked in but not on the ballots cast on March 24.

And this potential exists for every candidate, twisting the results in confusing ways. The possibilities boggle the mind.
Posted by Éric at 10:35:00 AM