PQ leads by one. Or nine?

A CROP poll released last week got quite a bit of attention as it placed the Parti Québécois narrowly ahead of Jean Charest's Liberals. Another poll that I noticed today on Forum's website shows that the PQ leads by nine points over the Liberals and that François Legault's CAQ has dropped to only 19% support.

In my article for The Globe and Mail today I combined the Léger and CROP polls to make a more well-rounded projection of the situation in Quebec. You can read it here.

I wrote about the Forum poll for Le Huffington Post Québec here. The article is in French. I think I was the first person to notice the poll, or at least write about it, as I can't find any mention of it elsewhere.

CROP was last in the field January 17-21, and since then the Parti Québécois has picked up a whopping nine points to lead with 30%. Though this shows a huge gain in support for the PQ, CROP's polling was well below what Léger was finding, so it is more likely that the PQ at 21% in CROP's last poll was at the lower end of the margin of error. 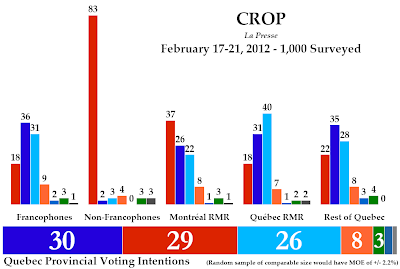 The Liberals are unchanged at 29%, while the CAQ is down five points to 26%.

Québec Solidaire is down three points to 8% while the Greens are down two to 3%. Option Nationale is unchanged at 2%.

The PQ is up 12 points to 36% among francophones, while the CAQ and Liberals are down three points apiece to 31% and 18%, respectively.

Jean Charest and François Legault are tied at 21% on the leadership question, while Pauline Marois is close behind with 19%. Support for sovereignty was at 39% in this poll. 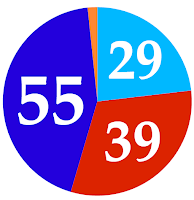 With these numbers, the Parti Québécois would form a minority government with 55 seats. The Liberals would win 39 seats and the CAQ 29, with two seats going to Québec Solidaire (both in Montreal).

The PQ wins 13 seats in and around Montreal, four in Quebec City, and 38 in the rest of Quebec.

The Liberals win 34 seats in and around Montreal, none in Quebec City, and five in the rest of Quebec.

The CAQ wins nine seats in and around Montreal, seven in Quebec City, and 13 in the rest of Quebec.

In other words, this poll is very similar to Léger's and shows the same sort of battle evolving: Liberals in Montreal, CAQ in Quebec City, PQ everywhere else. But increasingly we're seeing that the PQ is going to be able to challenge the Liberals in and around Montreal and the CAQ in the suburbs of the city, meaning that the PQ is best placed to form government.

Now to the Forum poll, which argues that the PQ is back to where it was in early 2011. 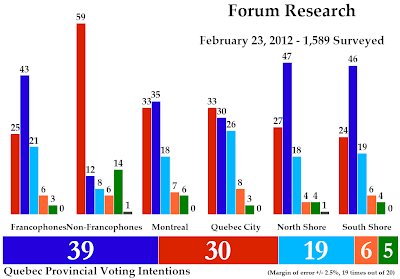 As far as I can tell, Forum hasn't waded into the provincial scene in Quebec before. This is their first Quebec poll, and it is quite an unusual one - or at least compared to what other polls have shown.

The poll, however, was conducted on February 23. That was the same day that La Presse published the new CROP poll that put the CAQ in third place, four points behind the leading PQ. It is unlikely that this news could not have had a big effect on the poll, and this is always a danger when polls are conducted on one day only.

Nevertheless, the Parti Québécois leads in Montreal with 35% and on the "North Shore" (47%) and "South Shore" (46%). I've tried to find out how exactly Forum defines these regions, but I assume it is the Montreal and Quebec City CMAs with the North/South shores representing those areas north and south of the Ottawa and St. Lawrence Rivers. The PQ is second in Quebec City with 30%.

The CAQ is in third across the board, with 18% support in Montreal and the north shore, 19% support on the south shore, and 26% in Quebec City.

Forum put a twist on the usual sovereignty question, giving respondents four options. They are somewhat differently worded compared to what you usually see in Quebec polls, but boil down to sovereignty, sovereignty-association, distinct society, and status quo. 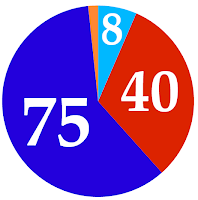 Assuming that Forum divides the province geographically as I've spelled out above, this poll would deliver 75 seats to the Parti Québécois and a majority government. The Liberals would win 40 seats and the CAQ only eight - one fewer than they have right now. Québec Solidaire wins two seats, both in Montreal.

Regionally, the PQ wins 28 seats in Montreal, two in Quebec City, and 45 in the rest of Quebec.

The Liberals win 28 seats in Montreal, six in Quebec City, and six in the rest of Quebec.

The CAQ wins no seats in Montreal, three in Quebec City, and five in the rest of Quebec.

So instead of a PQ minority and a respectable third-place showing for the CAQ, Forum sees a PQ majority and a disaster for François Legault. I imagine the truth is somewhere in between, but that a poll can produce such a result indicates just how soft the CAQ's support truly is and that Legault is fighting Marois for the hearts and minds of fence-sitting Quebecers, not Charest. Jean Charest looks to be stuck at around 30% and has a solid base, which is not a horrible position for the strong campaigner. He could turn that into 35% and squeak out another victory, but the campaign could turn against him and the PQ could romp to a majority win.

This might all be resolved in a matter of months if Jean Charest calls an election. But if he doesn't, and we have to wait until the fall or the spring of 2013 for a resolution, the roller coaster ride will continue.
Posted by Éric at 2:11:00 PM