Two polls were released recently by Léger Marketing (via Le Devoir and the Montreal Gazette) and CROP (via La Presse) on the provincial political situation in Quebec. The province remains in flux, but thanks to a slip in support for François Legault's Coalition Avenir Québec, the Liberals and Parti Québécois have made gains. 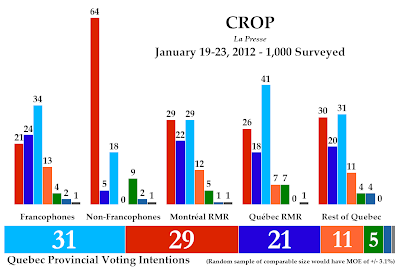 We'll start with the older CROP, which shows a close race between the CAQ and the Liberals.

Compared to their last poll from December 12-14, the CAQ has dropped eight points to 31%, only two points ahead of the Liberals (+1 to 29%). The PQ is up three points to 21%, but is still trailing the others by a wide margin.

Québec Solidaire stands at 11%, the Greens are at 5%, and Option Nationale (its first appearance in province-wide polling) has the support of 2%.

The Liberals are ahead among non-francophones, with 64% support to 18% for the CAQ. They are also tied with the CAQ in Montreal with 29%. The PQ sits at 22% in and around the city. 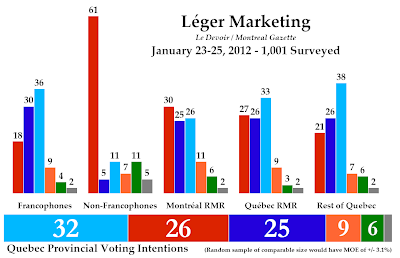 Léger was last in the field January 11-12, and since then the CAQ has slipped one point to 32%. The Liberals are also down one to 26%, while the Parti Québécois is steady at 25%.

The Liberals lead among non-francophones with 61%, with the CAQ and the Greens tied in second with 11%. They also lead in and around Montreal with 30% to 26% for the CAQ and 25% for the PQ.

But Léger was also in the field December 13-14. As both Léger and CROP were polling at around the same time in both December and January, we can compare the trendlines.

Provincially, the two polls show a significant drop in CAQ support since December, five points for Léger and eight points for CROP. They both show a gain for the Liberals (four points for Léger, one for CROP), and gains for the PQ (one point for Léger, three for CROP). That is a pretty consistent trend.

The consistencies continue in some of the cross-tabs. The CAQ is down between six and ten points among francophones, while the Liberals are up two points in both polls and the PQ is up three. The CAQ is also down across the board in Montreal, Quebec, and in the regions in both polls, with the two surveys showing significant, double-digit drops in and around Quebec City. They also show Liberal gains in the capital and the regions, and agree on PQ gains in Montreal and Quebec City.

What we can take from these two polls is that the race in Quebec is becoming a three-way contest. The CAQ is dropping while both the Liberals and PQ have made modest gains, thanks to increases in support among francophones. The Montreal region is very tight, while the CAQ leads in Quebec City. The polls do not agree on what is happening outside of the two major cities, however.

And this makes a big difference in the seat projection. With the numbers from the CROP poll, the Liberals turn a tight race in the Montreal region and in the rest of Quebec into a minority government. Though they are 13 points behind the CAQ among francophones, they are nevertheless only one point behind them in the regions of Quebec, where a good chunk of the seats are located. I don't quite understand how this can be, considering that the regions of Quebec are predominantly francophone, but this is what CROP is showing. 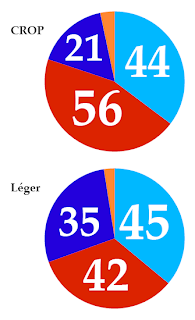 The tight race in CROP's polling results in 56 seats for the Liberals, 44 for the CAQ, 21 for the Parti Québécois, and four for Québec Solidaire. Note, however, that the CAQ trails the Liberals by a margin of five points or less in nine ridings, which could turn this seat projection into 53 for the CAQ and 47 for the Liberals.

In and around Montreal, the Liberals win 28 seats, the CAQ 17, the PQ six, and QS four.

In and around Quebec City, the CAQ wins eight seats, the Liberals two, and the PQ one.

In Léger's polling, however, the Liberal lead in Montreal puts them in good standing, while the close race among francophones gives the PQ a boost outside of the major cities.

With their numbers, the CAQ wins 45 seats, the Liberals win 42, the Parti Québécois wins 35, and Québec Solidaire wins three.

In and around Quebec City, the CAQ wins seven seats, the Liberals three, and the PQ one.

All of this points to a minority government. The question is whether that minority would be led by Jean Charest's Liberals or the CAQ's François Legault.

Quebecers would appear to prefer Legault, who scored between 23% and 25% in the "best premier" question. Charest was second with 19% in the two polls, while Pauline Marois scored between 11% and 15%.

Léger had some interesting details on how Quebecers feel about the national question. CROP found support for sovereignty sitting at 37%, while Léger has it at 43%. But most interestingly, 41% of the CAQ's supporters are sovereigntists. That is not much less than the 55% of Québec Solidaire's supporters, though at 85% the PQ gets the vast majority of its support from sovereigntists.

More specifically, however, Léger found that 30% of Quebecers would choose sovereignty as their first preference, compared to 39% who wanted more powers for the province. Only 21% were happy with the status quo.

Put together, that means 69% of Quebecers want more powers of some kind. When we break that down by political support, we get 85% of the CAQ's supporters wanting more power. That is not much less than the 95% of the PQ's supporters. This will put Legault in a difficult position, as his supporters seem to want him to work towards getting more powers from Ottawa while his party has said it doesn't want to touch the issue.

The PQ is mulling pushing sovereignty harder, particularly as a bulwark against the federal Conservative government. According to Léger, 14% of Quebecers who said they intended to vote for another party would instead vote for the PQ if they pushed the sovereignty file harder. That would bump them up to 36% support in the province, pushing the CAQ down to 26% and Québec Solidaire to 7%. The Liberals wouldn't be much changed, and that means the PQ would stand a good shot at a slim majority government.

It would appear that Quebecers simply want their leaders to have a plan. Legault has said he'll focus on the province's problems and Charest has his Plan Nord and federalism. The PQ, however, does not have the same kind of firm position, as they are not pledging sovereignty but instead a "sovereigntist governance". As I've seen mentioned elsewhere, Quebecers do not seem to want to support a party with enthusiasm when that party can't support its own raison-d'être with enthusiasm.

It might not be a winning formula, however. In 2007, André Boisclair's electoral chances were hurt by the focus on sovereignty during the campaign. Jean Charest brought up the issue of partition, and Quebecers flocked to Mario Dumont's middle-of-the-road ADQ. Considering what happened in that campaign, a push for sovereignty by the PQ might instead be the winning formula for François Legault's CAQ.
Posted by Éric at 11:07:00 AM