Five national and two Quebec-only polls were released in January, surveying a total of 8,417 Canadians. Thanks to increases in Ontario and Quebec, both the Conservatives and Liberals made gains on their December 2011 averages. 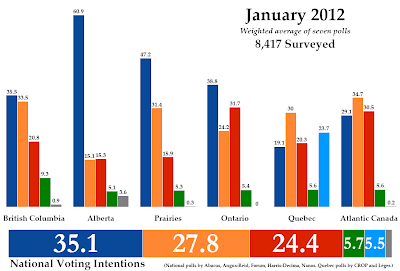 The Conservatives averaged 35.1% support in January, up 0.7 points from December. The New Democrats averaged 27.8%, down one point, while the Liberals polled at 24.4%, up 1.7 points since the previous month.

The Greens were at 5.7% while the Bloc Québécois was at 5.5% nationally. Both had dropped 0.4 points.

This represents another month of decline for the New Democrats, who have fallen steadily since hitting 32% in September 2011. The Conservatives appear to have halted a slide of their own since September, while the Liberals have been around 23% or 24% for the last four months. 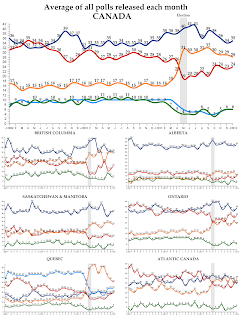 The Conservatives picked up three points in Ontario in January, averaging 38.8% support. The Liberals gained 1.6 points and stood at 31.7%, while the New Democrats were down 1.8 points to 24.2%. The Greens averaged 5.4%.

In Quebec, the New Democrats have continued to drop, this time by 2.9 points to only 30%. The party had averaged 45% in Quebec as recently as October 2011. The Bloc Québécois lost 0.7 points to reach 23.7% in January, while the Liberals were up 2.8 points to 20.3% in the province. This is the third consecutive month of Liberal increase in Quebec, and they are now at their highest point since March 2011. The Conservatives gained 0.2 points in Quebec and averaged 19.1% in January. Their support has been virtually constant since February 2011.

In Alberta, the Conservatives picked up 2.4 points since December and averaged 60.9% support. The Liberals moved ahead of the New Democrats for the first time since before the May 2011 election by gaining 3.1 points to hit 15.3%. The NDP fell 4.4 points to 15.1%. 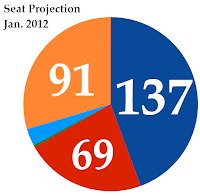 With these levels of support, and using the current 308-seat electoral map, the Conservatives would have won 137 seats in a January election, down three seats from their December 2011 projection. The New Democrats would have won 91 seats, down nine since December, while the Liberals would have won 69, a gain of eight.

Though this would point, at first, to a Conservative minority government, the NDP and Liberals could combine for a 160-seat majority.

The Conservatives would have won 17 seats in British Columbia, 27 in Alberta, 19 in the Prairies, 53 in Ontario, 10 in Quebec, 10 in Atlantic Canada, and one in the north.

The New Democrats would have won 13 seats in British Columbia, one in Alberta, six in the Prairies, 20 in Ontario, 42 in Quebec, eight in Atlantic Canada, and one in the north.

The Liberals would have won five seats in British Columbia, three in the Prairies, 33 in Ontario, 13 in Quebec, 14 in Atlantic Canada, and one in the north.

Though this may seem like bad news for the NDP, the problem for them is Quebec and Quebec alone. The party is polling equal to or higher than their 2011 election results in British Columbia (+1 percentage points), the Prairies (+2), and Atlantic Canada (+6) and they have only slipped slightly in Alberta (-2) and Ontario (-2).

In Quebec, however, the party is down 13 points. What this means is that the New Democrats are still doing quite well in English Canada. They have consolidated the support they won in the last election, but in Quebec the party is in big trouble. Once the party slips below 30% in the province, they will start to lose seats in droves. With those seats will go their hopes for forming the next government.
Posted by Éric at 12:03:00 PM