No, this isn't a re-post of the infamous CROP poll that came out during the campaign, marking the beginning of the NDP's rise in the province. But considering that the last poll we saw coming out of Quebec put the NDP in second behind the Liberals, it is worth noting that they are still on top according to CROP. 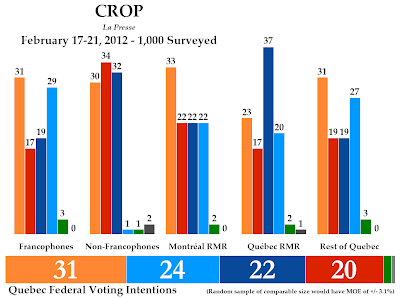 CROP was last in the field January 19-23, and since then the New Democrats have gained two points to sit at 31%, just above the psychological bar of 30%. It is also, in my estimation, an important bar for seats. Once the NDP drops below 30%, they start to lose seats in bunches.

The Bloc Québécois is up two points to 24%, while the Conservatives are down two to 22%. The Liberals are up one to 20%.

This might seem to completely dispel the most recent Forum poll which put the Liberals ahead in the province. While the poll certainly has the Liberals at a lower mark in Quebec, it is nevertheless the best result for the Liberals in a CROP poll since October 2010. It seems safe to say, then, that the Liberals are doing relatively well in Quebec.

This 24% is also the highest that the BQ has registered in CROP's polling since the May 2011 election, while the 30% satisfaction rating of the Conservative government is the lowest since April of last year.

In the all-important francophone demographic, the New Democrats hold a narrow edge over the Bloc with 31% to 29%, a net gain of two points for the Bloc on the NDP since the end of January. The Conservatives are down one to 19% while the Liberals are unchanged at 17%.

With the small sample sizes of non-francophones, wide variations are to be expected: the NDP has gained 10 points in this demographic since January while the Tories have lost 13. But it is interesting to note that the three parties are virtually neck-and-neck. It makes the West Island a bit of a free-for-all, with a possibility that all three parties could win a seat on the island.

But in the Montreal region as a whole, the New Democrats are up four points and lead with 33%. The three other parties are tied at 22%, but that is a gain of three points for the Liberals and a drop of one for the Tories and two for the Bloc.

In Quebec City, the Conservatives are down one but still comfortably lead with 37%. Their closest rival, the NDP, is down two points to 23% while the Bloc is up five to 20%. This is actually very bad news for the New Democrats, as CROP's definition of Quebec City does not extend to the Lévis area where the Tories hold their seats. In other words, the NDP risks being swept from Quebec City with these numbers.

In the rest of the province, the NDP is up one to 31% while the Bloc is up five to 27%. The Liberals and Conservatives are tied at 19%, with the Tories dropping four points.

This would likely result in the New Democrats winning 41 seats on the current 75-seat map, with the Liberals winning 13, the Conservatives 12, and the Bloc Québécois nine.

While 48% of Quebecers were undecided or responded "none of the above" on who is best suited to be Prime Minister, 19% of Quebecers feel that Stephen Harper is the best option. Liberal Bob Rae comes up a close second with 16%, despite his interim status. By comparison, Nycole Turmel (a francophone Quebecer to boot) scores only 8%. Daniel Paillé registered 7%, his highest so far and the highest any Bloc leader has polled (whether undefined or identified as Vivian Barbot, who was president of the party) since Gilles Duceppe's resignation. His numbers are still well below Duceppe's, but he appears to be gaining a little bit of traction.

This poll breaks a streak of four consecutive surveys pegging NDP support at below 30% in the province, which is good news for the party. That they hold a seven point edge over their nearest rival is also positive, after trailing in one recent poll and leading the Bloc by only one point in another. They are still not out of the woods, however, as they are losing ground to the Bloc Québécois among francophones and it does not appear that they are in a position to hold on to Quebec City. That is nothing new - they haven't lead in the region in any Léger or CROP poll since November.

New Democrats should keep the champagne cork in the bottle for now. Since the election, CROP has generally pegged NDP support higher than other polls taken at around the same time. Their NDP numbers have been, on average, about 3.3 points higher. Whether CROP is on the money while the others are incorrect is certainly possible, and CROP has often been closer to Léger's polling than those of the other firms that are not Quebec-based and poll nationwide, but it would appear that CROP is probably near the high range of likely NDP support in Quebec.
Posted by Éric at 9:29:00 AM