PC landslide not so certain in Alberta

With the release of a new poll from Forum Research, the Alberta projection has been updated and has swung somewhat significantly to the benefit of the Wildrose Party.

The poll itself shows very little change from the firm's last survey of January 17, and it being the newest data the model has shifted to take into account the latest information available. But with Forum's numbers diverging so widely from polls that have come from other firms, particularly that of Léger Marketing, the level of volatility is high enough that a whole swathe of outcomes can be envisioned.

The Progressive Conservatives are now projected to have the support of 41.1% of Albertans, a significant drop since the Tories were projected to take almost 46% of the vote on February 7. It is still enough for Alison Redford to win a comfortable majority government of 67 seats.

But Wildrose has benefited greatly and are now projected to win 27.2% of the vote and 17 seats, a robust opposition compared to the current situation in the Alberta legislature.

The amount of movement among the Liberals, New Democrats, and the Alberta Party has been relatively insignificant.

However, since the polls have been ranging very wildly of late, there is an extremely slim chance that Wildrose could actually take more of the vote than the Tories. Wildrose's high range currently stands at 34.2% to the Tories' low range of 33.1%. However, the Progressive Conservatives could take as much as 49.1% of the vote and Wildrose as little as 20.2%.

But with a huge degree of disparity in the regional polling, particularly in Calgary and the rural parts of the province, Wildrose could finish ahead of the PCs in both regions. This would put them in a position to win as many as 50 seats and form the government, though this outcome is very unlikely. But the level of uncertainty is quite high at the moment.

This has also opened up a bit of an opportunity for the Liberals, who were projected to win no more than a single seat on February 7. Though that has dropped to zero, the level of volatility gives them the potential to win as many as four.

Calgary is less clear cut, but the Tories are projected to have an eight point lead over Wildrose, with 41% to 32.9% support. In the rural parts of the province things are even less certain, but the projection puts the Tories at 39% to 34.6% for Wildrose. These two regions will be the major battlegrounds for Wildrose and the Progressive Conservatives.

I have added two charts to the right-hand column, showing how the vote ranges for the parties have overlapped so far in the projection, and also tracking the precise vote projection province-wide and in each of the three regions of Alberta. 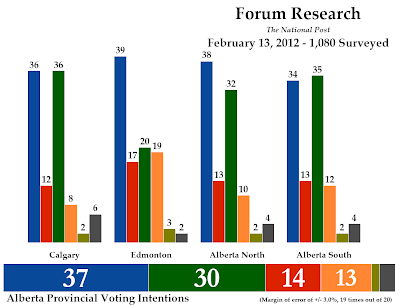 This Forum poll puts the margin between the Tories and Wildrose at only seven points, compared to 22 points in the recent RoI poll and 37 points in the Léger poll. This explains why the high and low ranges for the two parties are so far apart.

But compared to their January 17 poll, Forum only finds the PCs slipping one point with Wildrose gaining one, while the Liberals and NDP hold steady.

The PCs have picked up six points in Edmonton while Wildrose is up two, compared to a drop of two points for the Liberals and a drop of three for the NDP.

In Calgary there has been little change, with the PCs down two and Wildrose up one. The result is a tie at 36%. There was virtually no change in northern Alberta as well.

In southern Alberta, however, the Tories slipped 10 points to fall one point behind Wildrose, up five points to 35%.

According to the poll, roughly one-third of PC voters in 2008 have gone over to Wildrose, explaining the rise in support for the party. The Liberals, however, have lost relatively uniformly, with about 1/5th going to the Tories and 1/10th to the NDP and Wildrose each.

Alison Redford's approval rating is good, at 44% to 37% disapproving. She has a net positive rating among women, Tory and Liberal voters, as well as in every part of the province. Danielle Smith of Wildrose also has a good approval rating at 42% to 29% disapproving, with positive ratings among both men and women, voters older than 35, among Wildrose voters, in Calgary, and in both northern and southern Alberta.

Raj Sherman has an approval rating of 30% to 34% disapproval, but has net positive numbers among women, supporters of the NDP, Liberals, and Alberta Party, as well as in Edmonton.

But while this poll shows relative stability and a small uptick for Wildrose, it continues to muddy the waters in Alberta. Whether it is a close race as Forum argues or a landslide like Léger has recently found is difficult to determine, particularly as Forum's findings are virtually unchanged since their last report. This points to an election result that could be very hard to predict unless the polls start to agree with one another a little more.
Posted by Éric at 2:28:00 PM