The latest numbers from Léger Marketing, published in the Journal de Montréal yesterday, caused quite a stir. They placed the Liberals, Parti Québécois, and Coalition Avenir Québec in a three-way tie, suggesting that the CAQ is slipping and the PQ, written off only weeks ago, is on the upswing. 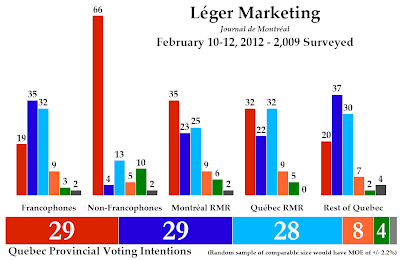 Léger was last in the field January 23-25, so only a few weeks ago. Since then, the Liberals have gained three points and are tied with the Parti Québécois at 29%. The PQ has picked four points since Léger's last poll.

The CAQ, meanwhile, has dropped again - this time by four points to 28% support, putting them in third. Since the party was launched in November, no poll has put the CAQ at anywhere but first place, while the PQ was last tied for the lead in Léger's polling in June 2011.

Québec Solidaire is down one point to 8% while the Greens are down two to 4%.

This is a huge change in Quebec. The PQ was on the road to catastrophe, following in the footsteps of the Bloc Québécois's debacle in May 2011. The CAQ was going to romp to victory, but instead we have a close three-way race between the parties, meaning anyone could come out on top.

But at the moment the PQ has the advantage. That is because they lead among francophone Quebecers with 35% to 32% for the CAQ. That is a gain of five points for the PQ and a drop of four for the CAQ. The Liberals trail with 19%, up one point since the end of January.

This lead among francophones gives the PQ a big advantage outside of Montreal and Quebec City. They lead there with 37%, up 11 points since the end of January. The CAQ is down eight to 30% while the Liberals are down one to 20%.

But Léger also released more detailed regional data, which they acquired thanks to their large sample size. I've removed QS, the PVQ, and the Others from the chart to make it a bit easier to read (QS and the PVQ are generally uniform anyway). 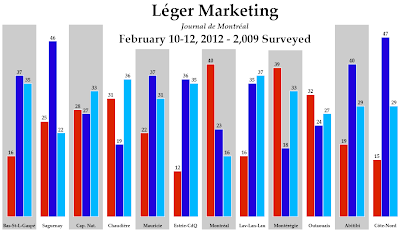 What this shows is that the province is very clearly divided up between the three parties. The Liberals lead in Montréal, the Montérégie, and in the Outaouais, while the CAQ leads in the Capitale-Nationale, Chaudière-Appalaches, and Laval/Laurentides/Lanaudière.

The PQ leads in the rest of the province: Bas-Saint-Laurent/Gaspésie, Saguenay-Lac-Saint-Jean, Mauricie, Estrie/Centre-du-Québec, Abitibi-Témicamingue/Nord-du-Québec, and the Côte-Nord.

Put more simply, the Liberals lead in Montreal and south of the city as well as in the Outaouais (the more federalist and anglophone parts of Quebec), the CAQ leads around Quebec City and north of Montreal (francophone middle-class areas that the ADQ performed well in back in 2007), and the PQ leads in the rest of the province (francophone, rural, and more isolated parts of the province).

If we look at it in terms of regions where parties are doing better than they are in Quebec as a whole, we see that the Liberals are doing well in the Chaudière-Appalaches (south of Quebec City) region as well as in the three regions in which they lead. That means that the CAQ will have some competition in one part of the province that is supposed to be more of a fortress for them.

It also shows that the PQ will be competitive in the Laval/Laurentides/Lanaudière regions north of Montreal, another part of the province that is supposed to be CAQ-territory.

The CAQ is also over-achieving in the Mauricie, Estrie/Centre-du-Québec, Montérégie, Abitibi-Témiscamingue/Nord-du-Québec, and Côte-Nord regions. This indicates that the CAQ will be able to put up a fight against the PQ in some of the francophone parts of the province and against the Liberals in the southern suburbs of Montreal.

In other words, an extraordinarily competitive election. The island of Montreal is safely Liberal, the PQ is safe in the Lac-Saint-Jean and northern Quebec regions, and the CAQ is well-positioned (but not dominant) in ADQ-friendly territory in and around Quebec City. But aside from that almost every riding will be hotly contested. 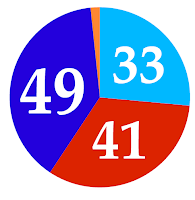 And this means a very divided National Assembly. Though the Quebec projection model is not 100% completed yet, it has been updated to reflect the new electoral boundaries. By-elections are also taken into account but not all factors have been applied.

With these numbers, and thanks to their lead among francophones, the Parti Québécois wins 49 seats, enough for a minority government if the CAQ decides not to prop-up the Liberals, who win 41 seats. The CAQ wins 33 seats and Québec Solidaire takes two.

But these are very close seat results, suggesting that any outcome is possible. The most likely scenario, however, points to a PQ minority with the Liberals forming the Official Opposition and the CAQ not far behind.

The Parti Québécois wins most of its seats in the regions of Quebec with 38. They take another 10 in the Montreal RMR and one in and around Quebec City.

The Liberals win most of their seats in and around Montreal, taking 33. They win four in Quebec City and another four in the rest of the province.

What is interesting about this projection is how it demonstrates what the change in the electoral boundaries does. When writing my Huffington Post article yesterday I did a quick projection using the old boundaries and came up with 53 PQ, 41 PLQ, and 29 CAQ seats. With the boundaries being tweaked and the Montreal area gaining a few extra seats that have been removed from rural parts of the province, the result is that the PQ is penalized to the benefit of the Liberals and the CAQ, who are stronger in and around Montreal.

With demographics favouring the metropolis, the electoral advantage the Parti Québécois has enjoyed in the past due to its support among francophones is being reduced somewhat. With the voting intentions of Quebecers being split three-ways, and with Québec Solidaire strong enough to siphon off enough support to play the PQ spoiler in more than a few ridings, the next election in Quebec could result in something completely unexpected.
Posted by Éric at 10:05:00 AM