Two polls on the provincial voting intentions of British Columbians were released recently, indicating that the B.C. New Democrats hold a wide lead over the governing B.C. Liberals. The size of that lead is in serious dispute, but one common trend is that the B.C. Conservatives have displaced the Liberals as the main alternative to the NDP in the British Columbia Interior. 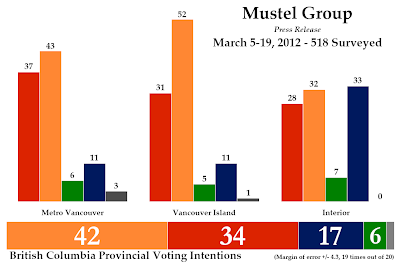 Mustel Group, a B.C.-based polling firm, was last in the field back in September, though I have no record of that poll aside from Mustel's trends chart. But since then, the B.C. New Democrats have slipped two points to 42% while the B.C. Liberals are up two points to 34%.

That's an eight point lead, generally the kind of gap we've seen in polls by other firms like Justason, Ipsos-Reid, and Angus-Reid.

Mustel has the B.C. Conservatives up three points to 17% while the Greens are down four to 6%.

Regionally, the New Democrats hold a wide lead on Vancouver Island and are more narrowly edging out the Liberals in Metro Vancouver.

But in the Interior, the NDP is second - behind the Conservatives. They stand at 33%, a big number for them in what should be expected to be their strongest region. This has resulted in the Liberals being pushed down to third, a significant development. The Conservatives have just picked up their first MLA due to floor crosser John van Dongen, but his riding of Abbotsford South is not exactly in the Interior.

Nevertheless, things are on the upswing for the Conservatives. They are still not a factor in Vancouver or on the Island, but if they can put together a performance like this in the Interior they could win a swathe of seats. 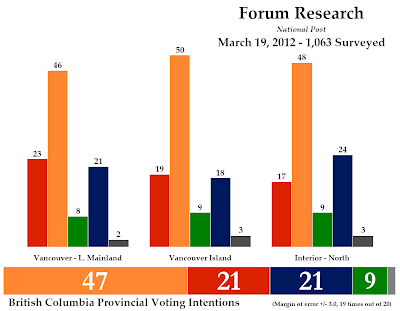 Forum Research agrees. They were last in the field on 22 February and since then they have the NDP up five points to 47%, their highest score in any poll since the end of 2010.

Forum has the Liberals down three points to 21%, tied with the Conservatives who are down one point.

The Greens are down one point to 9%.

So, Forum sees the gap not at eight points but instead at 26. This is not the first time that Forum disagrees so strongly with what other polls are showing.

Nevertheless, there are some consistencies with Mustel's poll: the NDP is dominant on Vancouver Island and lead in Vancouver, while in the Interior/North the Conservatives are polling ahead of the Liberals. In fact, since the Liberals are their major rival for votes, this sort of split in the Interior/North is probably better for the Conservatives than being slightly ahead in a three-way race. 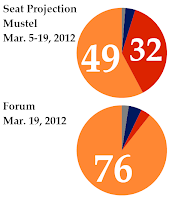 Both of these polls result in an NDP majority, but the make-up of the opposition and the size of that majority is radically different.

With Mustel's numbers, which are probably more likely in the case of an election when the better organization and fundraising of the B.C. Liberals can be brought to bear, the New Democrats win 49 seats, compared to 32 for the Liberals, three for the Conservatives, and one independent.

But with Forum's numbers, which are more reflective of a complete sea-change in B.C. politics, the New Democrats win a massive 76-seat majority. The Conservatives form the Official Opposition with only four seats, while the Liberals win three and two independents are elected.

It seems quite clear, no matter what the gap between the NDP and the Liberals, that Adrian Dix's party is comfortably ahead of Christy Clark's. Their personal numbers seem to back that up: Dix has an approval rating of 39% to 36% disapproval, according to Forum, while Clark has a dismal 26% to 60% split. This jives quite well with Angus-Reid's recent survey that put Clark's approval rating at only 33% to 58% disapproving and gave Dix a 47% to 37% split.

Leadership can make or break a party's fortunes. Adrian Dix can ride these numbers to government in May 2013, but Clark needs to turn the tide, and fast. People's opinion of her may be set by the time the next election rolls around.
Posted by Éric at 12:36:00 PM