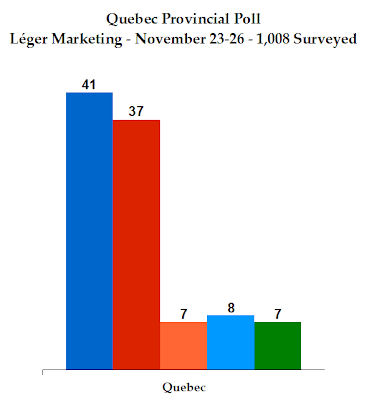 The Parti Québécois has opened up a lead over the Quebec Liberals greater than the margin of error, a significant point in what has been a very close public opinion race since the December 2008 election. The PQ's lead is built largely on the francophone vote. They have 47% of francophones behind them, compared to only 29% for the Liberals. As francophones are the deciding factor in the vast majority of Quebec seats, this means a lot of wins for the PQ outside of Montreal.

The Action Démocratique du Québec, which has been going through internal turmoil for the past few months, is at only 8%, roughly half of last year's electoral score. Québec Solidaire and the Quebec Greens (PVQ) are tied at 7% apiece, though they usually tend to over-achieve in polls, especially in the case of the PVQ as they don't run in every riding.

Jean Charest of the Liberals is the favourite for Premier, but only at 29%. Pauline Marois of the PQ follows at 26%, Amir Khadir of QS is at 8%, and Guy Rainville of the PVQ is at 1%.

In terms of seats, this would give the Parti Québécois 67 seats and a majority government. The Liberals would win 54, the ADQ would be reduced to two seats, the QS would gain one seat and win two overall.

The big question will be whether the PQ can maintain this lead until the next election in 2012-2013. Charest is a slippery character and always seems to come back whenever he is down.
Posted by Éric at 9:55:00 AM