Earlier this week, I wrote about the federal results of the recent CROP poll. Now it's time to review the provincial results. 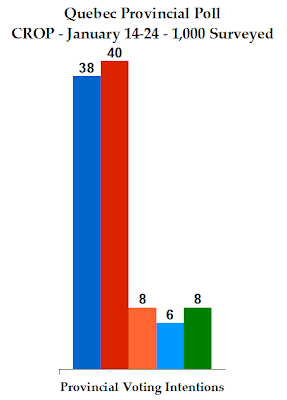 This is a similar result to the recent Léger poll, with differences within the margin of error. The province is divided between the two major parties.

This poll confirms what Léger first discovered: the ADQ has dropped to fourth or even fifth place among the parties in Quebec. Here, the ADQ is down to 6% while Québec Solidaire and the Greens are up to 8%. That is pretty dramatic.

There are few other details available. The PQ is ahead among francophones, 45% to 33%, and important lead. And the ADQ is at 17% in the Quebec City region, which is low for them.

I project the following seat totals from this poll:

Divided straight down the middle. The PQ and QS could govern together with the slimmest of coalition majorities.
Posted by Éric at 9:22:00 AM